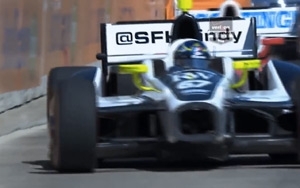 U.S. open-wheel auto racing series IndyCar has inked a multi-year content deal with USA Today Sports Media Group. The partnership gives the media company special access to develop content around the sport and its races. The deal, starting with the 2015 season, the 20th year of the Indy series (and 104th year of American open-wheel racing,) was announced on Thursday, but the relationship started unofficially last year. It makes USA Today Sports and its affiliated properties a "preferred marketing partner" of IndyCar in the U.S.

“To my knowledge this is the first time we have had this close a relationship with any [media property],” says C.J. O'Donnell, who joined Hulman Motorsports as CMO in 2013. That year, Hulman & Company, owner of IndyCar and of the Indianapolis Motor Speedway (IMS) since 1945, created the division to combine functions of both IndyCar and IMS. That includes sales, licensing, marketing and communications.

“The purpose is to generate editorial content; it's to service needs of the Indy fan base. So we are looking to give them access to make sure they get the story.” He says that, to be clear, it isn't “advertorial” content, but USA Today's pure coverage of the sport. He says the deal is a win for both partners since it will boost advertising by sponsors, and grow IndyCar’s fan base.

He says there are already ad deals in the works with the series’ marketing partners, and USA Today reaches more IndyCar fans than any other publication after the racing vertical. “There's a 300% index versus other news publications and they get 300,000 Indy fans every day.” He adds that the popularity of the sport is growing, and races garner a million broadcast views. “Every measure is up 30% year over year. It's a growing business and we are capturing fans.”

Honda and Chevrolet, which provide IndyCar engines, are also official partners, and they are title sponsors of IndyCar series races. O’Donnell says Verizon came in as a title sponsor last year. The sport has about 16 races this year both on tracks and on streets courses, with the jewel in the crown, the Indy 500, in its 99th year. Others include the Firestone Grand Prix in St. Petersburg, Fla. (a street course); the Toyota Grand Prix of Long Beach , Calif., (street) on April 19; and Firestone 600 in June at the Texas Motor Speedway in Fort Worth. O’Donnell says the goal is to grow the schedule to up to 20 races.

As part of the partnership, USA Today Sports will also expand its digital coverage of the sport on USAToday.com and will have a greater collaborative editorial effort with The Indianapolis Star, a Gannett company, per the partners. Jason Ford, VP of sports marketing at USA Today Sports Media Group, tells Marketing Daily that IndyCar has “opened the doors as much as they can to provide us access. In exchange for that, we are engaged, in the content side, with a digital, mobile, and social-first mentality, and on the heels of that is visual and print.” He concurs with O’Donnell about sponsor interest. “There are a number of sponsors already; we are in the final stages of buttoning up those programs.”

O’Donnell says that, beyond PR and partnerships like the effort with USA Today, IndyCar does its own advertising to promote its series. “We are on TV, radio, print, and a good portion is digital advertising.” He says the focus is on a group of consumers who may have forgotten that they like racing, and aren't married to any particular series. And, he says, there is little cross-indexing with NASCAR and open-wheeled. “IndyCar fans are more affluent, better educated, and more often a professional than what you see in NASCAR.” He says the opportunity is in the realm of motorsports fans who aren't die-hard loyalists of a specific series, whether NASCAR or any other. And, of course, the organization wants to get prodigal IndyCar fans back into the fold. “And we are bringing them back in droves.”

He says the Indy 500 actually works as a gateway event to grow awareness and interest across the series. “When we succeed there, it has tendency to grow every other event across the year. But we have put a lot of our efforts into growing [awareness of] events outside of the Indy. We put more [marketing] against those than against the 500 itself.”