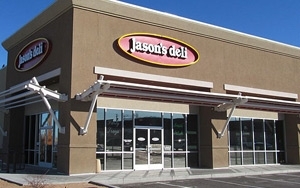 Jason's, which was founded in 1976 and has grown to more than 250 locations in nearly 30 states, beat out last year's #1, Firehouse Subs, differentiating itself with a salad bar and a menu focused on healthier food.

The survey — which focused primarily on QSRs, but also included leading fast-casual chains in which customers order at a counter — was conducted among more than 12,700 consumers, representing a cross-section of the four U.S. census regions, and a broad spectrum of income levels. However, 65% were women, reflecting that women are often the decision-makers on restaurant venue, particularly in family or group dining scenarios, according to Market Force.  All respondents were pre-screened as having dined in QSRs or fast-casuals in the past 30 days, and for ranking purposes, as having visited the specific chain being ranked.

Consumers were asked to rate their satisfaction with their last experience at a given restaurant and their likelihood to recommend it to others. The data were averaged to rate each restaurant brand on a Composite Loyalty Index. The study also looked at the attributes that drive these preferences, analyzing factors such as service, food quality and value, as well as the latest industry trends involving social media and mobile technology.

Jason’s was not only ranked as having the best food, but also the best value, atmosphere and friendliest staff. The only area where Jason’s was outdone was speed of service, which went to Jimmy John’s. Firehouse Subs, which claimed the sandwich chain title in 2014, also had a strong showing in food quality, service and value. When it comes to offering healthful food, consumers believe Jason’s Deli, Panera and McAlister’s Deli deliver better than the competition.

Wawa has highest "share of stomach" or average visits per month, followed by McAlister’s Deli and Subway.

Panera had the highest loyalty card awareness (93%) and participation rate (91%). It also had the greatest customer awareness for its mobile app, although Wawa boasted the highest download rate.

Papa Murphy’s (with 71% on the loyalty index) ranked No. 1 for pizza for the second year, differentiating itself by making pizzas for customers to take home and bake themselves.

Papa Murphy’s was ranked tops in food quality and healthiness, as well as speedy service and cleanliness. Pizza Ranch was recognized for its welcoming atmosphere and friendly staff, and performed well in most other areas. Carry-out chain Little Caesars tied with Papa Murphy’s for value. CiCi’s Pizza also fared well, ranking in the top three for many of the attributes studied.

Pizza Ranch and Little Caesars had the highest average visits per month.

Both Colorado-based chains have put a unique stamp on their approach to food: Chipotle focuses on the use of natural ingredients, and Qdoba on a varied list of menu items such as specialty burritos, soup and three-cheese queso sauce.

Not surprisingly, Chipotle and Qdoba were closely matched in consumers' ratings of food, service and operational attributes. Chipotle was ranked first for food quality and healthy food options, while Qdoba was recognized for its friendly staff, fast service and atmosphere. As in last year's study, Del Taco emerged as the price-leader. Moe’s scored well in nearly every area, especially friendly staff and healthy food.

Del Taco had the highest average number of visits per month, followed by El Pollo Loco. Among all consumers surveyed, 38% had visited a Mexican chain at least five times in the previous 90 days.

Qdoba had the highest loyalty card awareness, but Del Taco boasted the highest participation rate. Chipotle had the greatest customer awareness of its mobile app, but just barely, with Moe’s Southwest Grill and Taco Bell close behind. Chipotle and Taco John's were nearly tied on mobile app downloading, at 57% and 56%, respectively.

Raising Cane’s is a regional chain focused in the Louisiana area and known for its chicken fingers, which are growing in popularity among adults and children alike. It has undergone rapid growth in the past few years and has plans to expand to other parts of the country.

The top-three chicken chains consistently scored in the top three of the attributes evaluated in the study. Raising Cane’s was the food favorite, and also lauded for its speed of service. Chick-fil-A dominated in the staff friendliness, value and atmosphere categories. It was recognized for offering the healthiest food options, as were El Pollo Loco, Zaxby’s and Boston Market.

Raising Cane’s had the highest average number of visits per month, followed by El Pollo Loco. Among all respondents, 38% had visited a chicken chain at least five times in the previous 90 days.

Raising Cane’s had the highest loyalty card awareness, but Wingstop prevailed with the highest participation rate. Wingstop also had the greatest customer awareness for its mobile app, and the highest download rate.