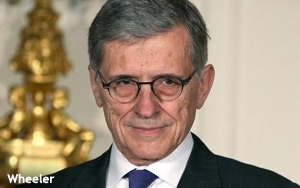 “Today history is being made by a majority of this commission as we vote for a fast, fair and open Internet,” Chairman Tom Wheeler said toward the conclusion of the agency's meeting early Thursday afternoon.

The FCC's three Democrats voted in favor of the order, which reclassifies broadband service as a utility, while the two GOP commissioners opposed the move.

“The Internet is simply too important to allow broadband providers to be the ones making the rules,” Wheeler said, as the audience at the Washington, D.C. meeting cheered.

The FCC head also dismissed criticisms from Republicans that the new rules mark a government takeover of the Web.

In addition to outright bans on blocking service, degrading service and creating fast lanes, the new rules also have a “general conduct” clause that will allow the FCC to take action if ISPs adopt practices that harm either consumers or content companies.

The FCC hasn't yet published its 300-plus page order, and details about the general conduct clause remain vague.

That lack of clarify spurred the digital rights group Electronic Frontier Foundation -- which supports net neutrality principles -- to say that the general conduct rule we are deeply concerned that the FCC’s new rules will include a provision that “sounds like a recipe for overreach and confusion.”

Internet service providers stridently oppose decision to reclassify broadband as a utility service, which is regulated under Title II of the Telecommunications Act. Among other arguments, ISPs say that Title II regulations -- initially developed for telephone companies -- aren't suited to more modern technology.

Verizon played up that argument in a statement -- issued in Morse code, and translated on a separate Web page -- criticizing the FCC's “'Throwback Thursday' Move.” Verizon says the FCC's order “imposes rules on broadband Internet services that were written in the era of the steam locomotive and the telegraph.

The FCC's vote came more than one year after a federal appellate court invalidated prior net neutrality regulations, which were less stringent than the ones imposed on Thursday. Those regulations prohibited ISPs from blocking or degrading traffic, and prohibited wireline (but not wireless) providers from engaging in certain kinds of discrimination.

The appeals court vacated the old rules on the grounds that they imposed common-carrier regulations on ISPs, which were then classified as “information” services. The court said that only the FCC could not subject information services to utility-style rules.

After that decision came out, net neutrality proponents urged the FCC to reclassify broadband as a utility service in order to pass the kinds of rules that would hold up in court. Initially, Wheeler appeared to resist doing so. Instead, in May he proposed a set of rules that would have prohibited ISPs from blocking or degrading service, but could have allowed them to charge content companies higher fees for priority delivery.

That proposal drew an unprecedented 4 million comments, many of which opposed the plan. In November, President Obama publicly weighed in and urged the FCC to reclassify broadband as a utility service.

Obama's statement spurred some Republican lawmakers to question whether the White House exerted undue influence over the FCC. But Wheeler told reporters on Thursday that he has been developing a plan that included reclassification since the summer.

The new rules won't take effect until 60 days after they are published in the Federal Register.