The new firm will address issues such as business practices and service levels, agency and client perceptions, satisfaction levels and potential areas of improvement.

Once the relevant issues are uncovered, Hallway Talk works with clients to recommend and implement improvements. “At the heart of this business transaction is personal relationships and sometimes it’s important to step back and evaluate how the relationship is going,” said Shaw Ford.  “Hallway Talk does that."

Often a barrier of silence is at the root of a problem in the agency-client relationship. “As a third party, we can confidentially explore the truth about an agency’s people, service, process and culture to uncover hesitations and issues, and even kudos, and help both sides improve the relationship,” said Shaw Ford.

While there are a variety of new business development and sales consultants, Hallway Talk's positioning is its focus on client retention as the source of business growth. Not only does Hallway Talk help agencies and other businesses retain their clients for a longer period, but insights revealed by the Hallway Talk process often lead to growth for the agency through new assignments or expanded scope of services.

"As an analogy, think of it as a leaky bucket. It doesn't matter what new business is added if the bucket leaks. Hallway Talk helps stop the leaks so that existing work is retained, and new work is added in. The net result is more business for Hallway Talk’s client," said Welsch.

The two founders have been colleagues and business associates in the advertising/marketing services sector for the past 15 years. Shaw Ford was the founder and owner of The Marketing Partners and Welsch has a background as an agency creative head and was a creative consultant. The two met when Welsch began consulting for The Marketing Partners in 2000 and once The Marketing Partners was acquired by Omnicom in 2007, they teamed up on numerous marketing assignments including several that ultimately evolved into Hallway Talk.

As to the name Hallway Talk, the partners say it derives from the fact that informal discussions among clients often make or break an agency and too often clients do not share the issues that are being discussed in so-called hallway chatter or via texts.

The business is co-based in Orange County and San Francisco, California. 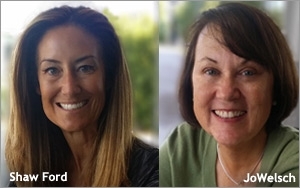