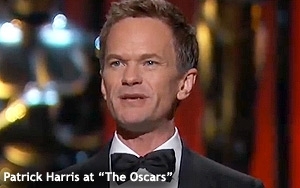 His performance may have been panned, but Oscar host Neil Patrick Harris was the top winner in terms of exposure, according to video analytic platform Vu Digital. Harris was on screen for 13 minutes, which translates to $51 million, calculated by time on screen multiplied by $2 million for 30 seconds of ad time.

Vu Digital analyzed 18,094 frames of Oscar content, and identified more than 24,000 separate data points from the program including text on the screen, spoken words/phrases, objects, brands and faces. More than 3,200 phrases were spoken during the show -- defined by a phrase as a sentence, or phrases of a sentence -- and more than 4,000 words appeared on the screen throughout the night.

Six of the top 10 personalities with the most exposure were women, including Octavia Spencer, who wasn't nominated for anything, but received air time thanks to a comedy bit that ran the course of the show that showed her playing along with Harris to keep her eye on his winner predictions locked in a glass case.

Spencer's screen time ultimately ran for 1.32 minutes and generated $5.2 million in exposure. Although winners and presenters rounded out the top 10, Jack Black, who was neither a presenter or a nominee, received 34 seconds of air time valued at $2 million. And PricewaterhouseCoopers, auditor of the show, received more than 15 seconds of air time -- spending more time on screen than well-known celebrities Keira Knightley, Jessica Chastain, and Matthew McConaughey.

This is the first time that Vu Digital has used its technology to conduct a study around the Oscars, although the firm’s technology is built specifically to execute this type of research since they use an algorithm that recognizes, identifies and measures every discernible object, face, sound, word and brand that appears on screen.

Meanwhile, many of the celebrities within Vu Digital's top 10 list are associated with brands. J.K. Simmons, for instance, is the spokesperson for Farmers Insurance. Eddie Redmayne appears in Burberry ads and Jennifer Hudson supports American Family Insurance. And in instances where there’s a strong association between the celebrity and the brand, Oscar exposure makes a big impact on brand awareness.

When Amobee Brand Intelligence looked at social consumption data pertaining to the brands associated with those who saw the most screen time during the Oscars based on Vu Digital's report, the agency found J.K. Simmons helped Farmers Insurance jump 603% in awareness comparing February 22-26 to February 17-21. Best Actor Eddie Redmayne helped Burberry's awareness spike 257%.

Lego was another big winner. The toy brand's Everything Is Awesome Best Song nomination was essentially a two-minute commercial that helped Lego reach a post-Oscars awareness lift of 61%. Yet everyone on stage benefited from the exposure, albeit in unequal ways.

Not all brands benefited from seeing their spokesperson attend the show. There was only a 4% uptick in consumption data relating Best Actress winner Julianne Moore to L'Oreal in the days following the Oscars. Amobee believes L'Oreal's uptick in relation to Julianne Moore was relatively small when compared to the halo effect realized by other brands. This could be an indication that the company is changing their celebrity spokesperson too often.