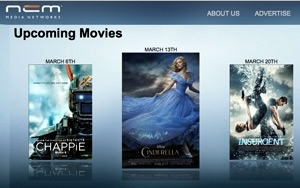 Omnicom Media Group has entered into an upfront agreement with National CineMedia to bring Omnicom client brands to movie patrons across NCM's network. The deal, which will cover approximately $50 million in advertising during the next year, is the latest example of Omnicom Media Group's video-neutral approach to media-buying.

"This represents the continued evolution of our premium video strategy, and is another step toward ensuring that our clients have preferred access to a wide range of advertising alternatives," said John Swift, CEO, North America Investment of Omnicom Media Group in a prepared statement.

The deal encompasses more than mobile advertising. The entertainment factor and access to video and movie theater trivia games through smartphones continues to fuel marketing in theaters.

For the first time, more than one-quarter of the global population will use smartphones in 2015; and by 2018, more one-third of consumers worldwide or more than 2.56 billion people, per eMarketer. Smartphone users in North America should surpass 220 million this year, up from 204 million in 2014, estimates the analyst firm.