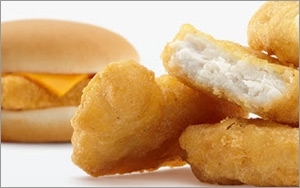 Beleaguered McDonald's is aggressively stepping up its efforts to reassure consumers about the quality of its food and cultivate a healthier, more sustainable image with younger generations, in particular.

McDonald's USA announced that over the next two years, it will phase in a policy of using only chickens raised without antibiotics that are important in human medical treatment.

In addition, starting later this year, it will offer jugs of low-fat white milk and fat-free chocolate milk from cows that are not treated with rbST, an artificial growth hormone.

The moves are in synch with McDonald's' recent "Our Food. Your Questions" marketing campaign, which seeks to address misconceptions about the ingredients and preparation of its food.

But the level of commitment required to make significant changes in the QSR giant's supply chain for its 14,000 U.S. restaurants serves as a particularly dramatic declaration from the new top management team — Steve Easterbrook, who officially took over as CEO just this week, and Mike Andres, who became USA president in October — that McDonald's is determined to walk the walk, not just pump up positive messaging.

“Our customers want food that they feel great about eating — all the way from the farm to the restaurant — and these moves take a step toward better delivering on those expectations,” said Andres, in announcing the chicken and milk policies.

London-born Easterbrook, previously chief global brand officer, was chosen to succeed Don Thompson as CEO because of his reputation for innovation — including a successful marketing program in Britain that was adapted for the "Our Food" initiative in the U.S.

Although Thompson introduced plans for meal customization and a digital "experience of the future" for the brand, among other moves, some restaurant industry observers asserted that he didn't make radical changes quickly enough. Thompson served as CEO for just three years before retiring at age 51.

After two years of worsening sales declines in the U.S., including suffering its largest same-store sales decline in 14 years last November, a series of change announcements began to emerge from the chain in December, prior to January's announcement of Easterbrook's ascension.

Early in December, McDonald's said that it was introducing fresh, whole fruit as a side option with Happy Meals. Days later, it made headlines with more dramatic news: The chain would be simplifying its menu to speed up service and "clear the way for future food innovations, which could mean adding new ingredients or customizing individual orders,” Andres told investors.

Further, it said that it would be reviewing all the ingredients in its food, as well as its holding and cooking techniques — setting the stage for initiatives like the new chicken-sourcing policy.

That policy is being praised by public health experts and consumer advocacy groups, who have become increasingly vocal about their concerns that the practice of feeding antibiotics to chicken, cattle and pigs could be contributing to the development of "superbugs" resistant to antibiotics critical in treating humans.

Given McDonald's' enormous purchase volumes and clout, its new chicken-supply policy "should have major reverberations throughout the meat and poultry industry," stated Caroline Smith DeWaal, safety director for the Center for Science in the Public Interest.

McDonald's, which first announced a policy limiting suppliers' use of antibiotics back in 2003 but hadn't been active in updating that, according to sources quoted by The New York Times, said it will now be working with poultry suppliers to achieve the new, more far-ranging requirements.

In recent years, the poultry industry — including leading suppliers Perdue and Tyson Foods — has already been taking voluntary steps to reduce its use of antibiotics used in human treatment.

McDonald's' move on this front is expected to pressure other restaurant brands and food suppliers to move in the same direction. But Chick-fil-A, as well as the two chains that are most often cited as attracting consumers away from McDonald's and other traditional QSRs with their healthier, simpler menu offerings — Chipotle Mexican Grill and Panera Bread — already had such polices in place. In fact, the latter two chains' policies are more stringent than McDonald's', since they do not allow poultry and meat suppliers to use ionophores, reported Reuters.

Ionophores are animal antibiotics not used for humans, which "help keep chickens healthy," said Marion Gross, SVP of McDonald’s' North American supply chain, in explaining the chain's decision to allow  suppliers to "responsibly" use these antibiotics. “If fewer chickens get sick, then fewer chickens need to be treated with antibiotics that are important in human medicine," she said. "We believe this is an essential balance.”

As for the new, hormone-free milk options, "while no significant difference has been shown between milk derived from rbST-treated and non-rbST-treated cows, we understand this is something that is important to our customers,” said Gross. Milk jugs are popular choices with kids' Happy Meals.