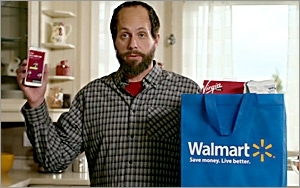 With all the concern among families over the use of wireless data these days — how much should they get? Does it roll over?, etc. — Virgin Mobile is promoting a new plan that allows families to determine just who in a family plan gets what.

In a new campaign from agency 180LA, touting its “Data Done Right” plan, Virgin Mobile (which is owned by Sprint) puts a father in charge of his family’s data usage. A television commercial airing this week shows the extent to which family members go to please their father (party sub sandwiches, alluding to a shrinking bald spot, a surprise birthday performance by Rick Astley) in order to get more data allocation. In another video, the father quizzes Astley to find that he would do all of the things he says he wouldn’t (i.e., “give you up,” “let you down,” etc.) in his hit “Never Gonna Give You Up,” for data.

“The main pain point for families [on family plans] is data free fall. There’s really no way to divide it up,” Peiti Feng, director of brand strategy and marketing communication for Boost and Virgin Mobile at Sprint, tells Marketing Daily. “The ‘Data Done Right’ plan really empowers families to take back this pain point and bring families back to order.”

Virgin Mobile’s “Data Done Right” plans are only available through Wal-Mart. A video designed to play in stores explains the plans further, showing how a pre-loaded app helps people allocate data to the plan members who need it most. With its ability to help families budget wisely, the plan was a natural fit with Wal-Mart’s overall price-saving strategy, Feng says.

“It really aligns with the family value that Wal-Mart positions,” Feng says. “If someone is not using the data correctly, this allows families a chance to course-correct.”

The new television commercial will run on cable networks such as ABC Family, the Food Network, TBS, TLC and USA. The campaign will also include digital and social advertising, as well as a heavy in-store element, Feng says.