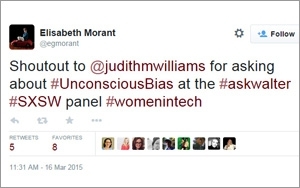 Lack of workforce diversity has become a hot topic among Silicon Valley companies. Many rally for more women in the workforce, but during a panel discussion at the South By Southwest (SXSW) festival, Google chairman Eric Schmidt's continuous interruption each time his former colleague U.S. Chief Technology Officer Megan Smith spoke sent the audience and Twitter into a tizzy.

The SXSW audience could hear Schmidt's interruptions nearly from the beginning of the panel, "How Innovation Happens," moderated by author Walter Isaacson. Toward the session's end, an audience question pointed to Schmidt's tendency to interrupt and talk over Smith. The related question on how personality biases in men and women affect workplace dynamics met with applause.

A Twitter tweet from Elisabeth Morant points out the woman asking the question was Judith Williams, head of the Unconscious Bias program at Google. Isaacson, the moderator, went as far as calling out the order in which the two panelists should answer questions.

The panel's message practically got lost. Diversity, immigration, broadband and the Internet, entrepreneurship, and fixing the educational system -- all are part of diversity that requires government action. "We have the world's stupidest policy, [meaning] we basically give people degrees and then kick them out [of the country] -- another brilliant U.S. policy," Schmidt said.

There's a conscious bias, per Smith. "70% of high school computer science teachers think boys are better than girls, despite evidence [otherwise]," she said.

Schmidt said 58% of people in American colleges are women, 42% men. He said the best way to solve the job growth problem is to hire women in higher-paying jobs, because they're very capable.