More than 60 million basketball fans will fill out NCAA March Madness brackets this year and so will digital marketing firm Prime Visibility, which has monitored social media -- largely Facebook and Twitter -- to determine whether social sentiment can indicate a "perfect bracket."

The firm’s monitoring effort finds that the Final Four will be Kentucky, Virginia, Arizona, and Duke. Undefeated and top seed Kentucky, perhaps unsurprisingly, will ultimately win the Championship Trophy against Virginia, per the marketing firm.

"It appears that teams generating the most amount of mentions are typically the favorites to win," says David Neuman, Director, Social Media Services, Prime Visibility. "While the Final Four does have only one or two seeds in our bracket, underdog wins were not uncommon throughout."

"How UCLA and Xavier made it to the sweet 16 when most experts don't have them making it that far some with UCLA not making it out of the 1st round [is surprising]," says Neuman. "People seemed to be discussing teams that have consistently made the tournament over the years."

This is Prime Visibility's third year doing this study. Last year's results resulted in an above average performing bracket. "While not perfect (or close to it), if I used those picks in bracket pools I did, I would have came in 1st or 2nd," says Neuman. 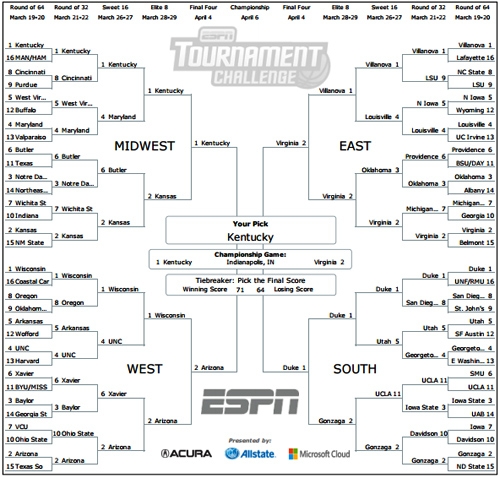