Google To Fly An Energy Kite, An Airborne Wind Turbine 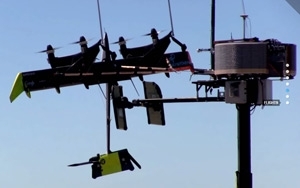 Google plans to fly an 84-foot wind turbine in April that the company has been working on for some time, Google X scientist Astro Teller told the audience at South By Southwest (SXSW) Tuesday.

The wind turbines do not look like the stationary windmill-type generators often seen across the Southern California desert. They look more like planes equipped with eight propellers tethered to polls or docks.

At an altitude around 450 meters in the air the plane begins making large circles in the sky, which rotate the propellers. The wind drag allows each of the eight propellers to continuously generate 600 kilowatts back down the tether to the grid. Air moving across rotors mounted on the kite forces them to rotate, driving a generator to produce electricity.

Before the latest version, Google built a 28-foot version to test the flight modes against different wind speeds, Teller said. It weighed between 200 and 400 tons. The new one that Google will fly next month weights 1% of the old one.

The idea is to harvest the power of the wind for a fraction of the cost per kilowatt of what traditional onshore and offshore wind turbines can do. "If this works as designed it would meaningfully speed up the global move to renewable energy," he said. "The big opportunity with wind is the higher you go, the higher the wind speed and the more consistent the wind."

To generate more power, wind turbines have become taller, heavier, and more expensive. On average, conventional onshore wind turbines require 100 tons of materials such as steel, fiberglass, and concrete to produce a single megawatt of capacity to power 500 U.S. homes. The new design will weigh and cost less.