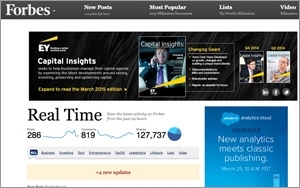 Forbes Media is bolstering its online sharing capabilities for consumers and advertisers with the acquisition of Camerama, a photo-sharing app. According to the companies, the Camerama technology will serve as the basis for a new platform of apps.

They will be developed by Camerama founder Salah Akram Zalatimo, who is joining Forbes Media as vice president of mobile products.

Founded in 2014, Camerama is a cloud-based photo-sharing app that allows users to control who can see their photos via invitation. The acquisition points to Forbes Media’s ambitions in the mobile space, as well as its hopes to form an online social hub around the Forbes brand.

Forbes Media chief product officer Lewis D’Vorkin explained: “Our goal is to build passionate communities under the Forbes umbrella -- the kind that marketers want to reach and that generate valuable and relevant content.”

Zalatimo stated that the acquisition “uniquely positions us to lead the development of mobile-first apps for niche social networks rooted in the Forbes brand.”

This is just the latest in a series of new digital initiatives from Forbes since the publisher was acquired by a consortium of investors last July. Last month, Forbes announced that it is using AOL’s Gravity as its exclusive native content ad platform for desktop. The ads will appear on the bottom of each Forbes article in a list of “promoted stories” that fits the look of Forbes’ overall layout.

In October, Forbes announced the launch of new BrandVoice home pages, offering marketers a chance to create their own permanent home pages within the Forbes.com Web site. Marketers using the pages can post additional brand content from across the Web, including content they originally created for other publishers.