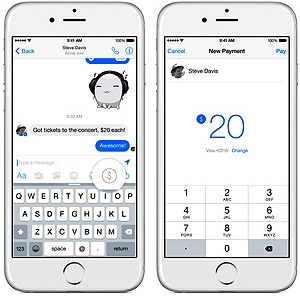 Proving the rumor mill to be correct, Facebook has gone and launched a peer-to-peer -- or friend-to-friend -- money transfer service.

Officially part of Facebook Messenger, the free feature will be rolled out over the coming days and months, the social giant said this week. Having formerly served as president of PayPal, Facebook Messenger head David Marcus is no stranger to the payments space.

Challenging established players like PayPal, a flurry of newcomers have thrown their hats into the peer-to-peer money transfer ring. Along with Square Cash and Venmo, Snapchat (albeit with the help of Square Cash) recently debuted a Snapcash service.

And, it’s no wonder -- considering all the money flowing into the market. In fact, peer-to-peer payments will more than triple from $5.2 billion, last year, to $17 billion in 2019, per a recent forecast from Forrester.

Despite the growing market, it remains to be seen whether there will enough room for so many competing services. While Venmo processed more than $900 million in transactions during the fourth quarter of 2014, the company actually reported slower growth compared to the previous quarter.

Regardless, Facebook has little to lose by testing the waters. The number of mobile Facebook users worldwide will approach 1 billion, this year, eMarketer estimates.

Put another way, more than 70% of all Facebook users will use mobile this year, while, by 2018, more than three-quarters of the social network's audience will access it via mobile phones on a regular basis -- reaching 1.34 billion users.

Stateside, nearly 80% of Facebook users -- or 123.1 million consumers -- are expected to access the site regularly via mobile device, this year, per eMarketer.

More broadly, mobile payments of all types are set to surge, according to Forrester, which recently predicted that the total volume will almost triple from around $50 billion, in 2014, to $142 billion in 2019. Within the latter figure, in-person mobile payments (for example, at retail checkouts) will come to $34 billion, or 24% of the total, up from just $3.4 billion today.