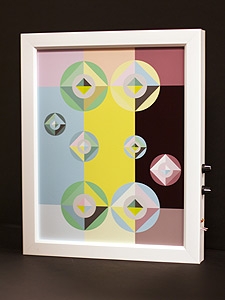 Now, the residency has unveiled the Musical Poster, its first product combining art and tech.

The Musical Poster can be played “acoustically” on a wall or in the performer’s lap, or can be hooked up to an amp. By touching eight different areas on the Musical Poster, the performer can "toggle" with individual musical loops to create a myriad of unique blends and can express their personal style by turning the knobs on the side of the poster to adjust the frequency and waveform of a loop. Indeed, a key challenge was to marrying the piece of art with an interface.

A video demonstrating the Musical Poster is available at https://vimeo.com/120200126

“Art is typically not meant to be touched. It’s relegated to a wall for appreciation at a distance,” said Ben Snell, the 20-year-old technologist behind the Musical Poster. “With the Musical Poster, we created an object that begs us closer, that turns viewers into participants and encourages a conversation between creator and performer.”

As part of the project, 72U invited Cherrytree Records recording artist/producer RAC aka André Allen Anjos, to compose an original track on the Musical Poster. "RAC and a few people from Interscope Records were hanging out at 72andSunny," says Maria Scileppi, Director of 72U. "They stopped by the 72U room and we showed them an earlier prototype. Andre (RAC) loved the musical poster and the collaboration was born."

Ultimately, the Poster is designed to facilitate an artistic collaboration between the designer and the performer -- breaking down barriers inherently constructed in traditional art pieces. "72U’s Musical Poster explores the future of music making, which is something that’s very important to me,” said André Allen Anjos. “It's easy to take a finished song for granted, but the process of getting there is often just as exciting as the finished product."

Now, the agency plans to further explore its possibilities. "We'll continue to iterate on the sound design," says Scileppi. "It was originally created to explore what a poster could be. The 72U team was challenged with defining and then making an 'interactive poster.'"