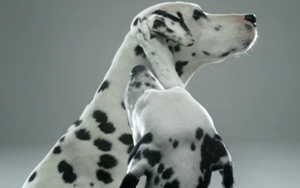 Beauty brand LaRoche-Posay is swapping ahh-glamour for aww-cuddles with its new global “#Skinchecker” campaign. Featuring some of the world’s most photogenic Dalmatians, a video follows the pooches as they lovingly check out each others’ spots, playing with the insight that many women are more apt to check for signs of skin cancer on loved ones than on themselves.

The campaign for the L’Oreal-owned brand, scheduled to break in the U.S. next month, also uses results of an IPSOS survey in digital and social elements to educate consumers about disparities in skin protection between men, women and nationalities. (The poll is based on responses from more than 19,000 people in 23 countries.) BETC is the ad agency.

LaRoche-Posay, like many skincare brands, has run skin cancer awareness campaigns for years, and most consumers — some 80% in the U.S. for example — wear some sun protection, at least some of the time. “But the idea behind this campaign,” says a spokesperson for the brand, “is that most skin cancer is treatable if it is caught early, so we wanted to encourage people not just to check on their loved ones, but to check out their own moles too, monitoring them for changes.”

In terms of screening for melanoma, Americans perform slightly better than the average, the study finds, having their moles checked out by a dermatologist a little more frequently than the global average. And they are somewhat more likely to regularly check them themselves. But they are less apt to tell someone close to them to have their moles looked at by a doctor: 33% of Americans have done so, compared with 44% of the global sample. (The recommendation rate is highest in Italy, Portugal, and Austria.)

Besides a social-media push and the hope that the monochromatic pups are enough to take the video viral, it also includes downloadable information on the ABCDEs of skin cancer, the five-point checklist dermatologists recommend when self-checking moles.