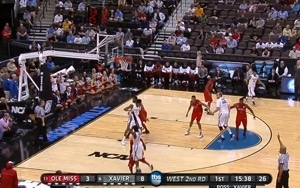 Google's and Bing's analytics teams are separately attempting to analyze behavior to predict the outcome of March Madness, the men’s collegiate basketball games.

The one with the most slam dunks could win over marketers. The two Internet giants took different approaches -- data and predictive analytics -- to pick brackets and NCAA winners.

Google analyzed search engine and YouTube data to see how consumer behavior has changed leading into this year's tournament, and what that means for brands looking to connect with fans.

Some 30% of people in the U.S. -- an estimated 90 million -- filled out a bracket, which forecasts the team that ultimately wins the tournament, according to a Google Consumer Survey. During March and April 2014, half of all searches related to college basketball were on mobile, and 40% of searches related to brackets were on mobile. In January 2015, that number rose to 60%.

Turner Broadcasting saw 70 million live streams, 45 million of which came from its mobile app, March Madness Live. The top popular second-screen activity was checking other scores, followed by watching highlights, searching for information about players, and posting on social sites, per a Google Consumer Survey. About three in 10 college basketball fans prefer to watch online highlights in addition to the live game.

Google also recently shared its own bracket. It was created using an algorithm based not just on Google search, but on fan activity across multiple platforms.

Based on Google's data, Kentucky, North Carolina, Louisville and Duke will play in the Final Four. Kentucky and Duke will remain the final two, and Kentucky will rise to take the championship.

Through Bing Predicts, the engine is choosing its own winner, crunching numbers. The technology will analyze the 9.2 quintillion potential brackets. The engine has already used its algorithms to predict outcomes of events such as presidential elections, the Super Bowl, and the Academy Awards, but the search engine's newest prediction engine may be the most ambitious.

Bing became the official bracket data partner of the NCAA earlier this week, launching the bracket builder. Think Big Data. The number being tossed around is 1 in 9.2 quintillion, actually written as a 9 followed by 18 zeroes. Even more specific, the odds are 1 in 9,223,372,036,854,775,808, per USA Today.

Bing said beginning Thursday, it will help fans keep their eyes on the court with a complete tournament schedule in search results.