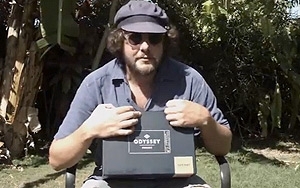 Now the campaign is putting its message into the hands of 80 brand ambassadors for a second phase and one that represents a huge creative leap into uncharted territory for both mono and Sperry.

"The Odyssey Project is more than an opportunity for Sperry to create branded content," said Michael Hart, co-founder and creative co-chair at mono. "It's far more ambitious than that, and the structure way more open-ended. And that's what's made it so exciting to develop."

The concept follows 80 ambassadors -- nicknamed “Intrepids” -- who have received shoeboxes detailing a customized adventure. One journey, for instance, will travel to a lost civilization now underwater off the coast of Naples, Italy. And Brooklyn-based photographer Andre D. Wagner documented his trip to the Hawaiian island of Lanai, where he was cut off from all human contact and challenged to capture self-portraits that reflected his experience.

"Just like the recipients of the shoeboxes, we don't really know what will come of it all," says Hart. "But honestly, that's what often creates the best stories. We love that with the Odyssey Project, Sperry isn't just a brand that inspires you to take an odyssey. It's a brand that sends you out on one. And all that Sperry asks in return is that you bring back a story. It's not controlled. It's not manufactured. And we couldn't have made it better if we had. We can't wait to see how the rest of them unfold."

The travelers will post in real-time their adventures with the hashtag #OdysseyProject and their final story -- which can be a video, series of photos or illustrations - will be published at Sperry.com/OdysseyProject and on Sperry social channels through the fall.

These 80 travelers were selected using two key criteria. "First, they must demonstrate a connection to Sperry's brand values," says Hart. "Do they share a spirit of adventure? Are they inventive? Do they seek out unique experiences and are they willing to get out of their comfort zone and try something unfamiliar?"

Second, Sperry wanted people who are able to tell a great story. "Some are artists who are adept at utilizing their talents to share a story," says Hart. "Others are just interesting people who can share a narrative in a compelling way. We also want to make sure that we bring together a group of travelers who have different experiences and backgrounds so that we hear different perspectives in the storytelling."

The flexibility and creativity of this campaign is designed to introduce a completely different look and feel than the project's first phase. "We don't have a standard list of 'requirements' because we don't want to limit the travelers' creativity or storytelling ability," says Hart. However, Sperry is providing the traveler with shoes to wear on their odyssey, though there are no requirements that pictures must include these shoes.

Ultimately, this campaign hopes to represent Sperry's brand values, regardless of who is controlling the message. “As a brand, Sperry strives to empower and inspire our Intrepid consumers to fearlessly pursue lives of self-discovery and meaning," says Karen Pitts, Sperry’s VP Marketing. "The Odyssey Project is our way of breathing life into this mission and delivering the promise of providing the tools and means to do so. As each odyssey unfolds, we become equally inspired as the ambassadors who have chosen to participate in the project.”
Media investment for Sperry in 2015 will triple the amount spent in 2014. Parent company Wolverine Worldwide plans to invest approximately $30 million in brand building initiatives in the fiscal year and maintain that level of investment going forward. In 2013 the brand spent nearly $12 million on ads and for the first nine months of 2014 spending totaled about $7.4 million, according to Kantar.
Video of the campaign is available here.
ad campaign, agency, apparel, brand marketing, storytelling
Next story loading