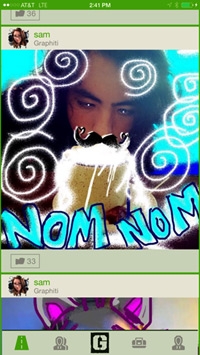 Magazine reading is not dead enough yet that we can’t remember the experience of rifling through waiting room stacks of titles we barely cared about. This passalong media often left traces of previous readers. How many teen girl and fashion magazines in these offices were defaced by silly eyeglasses or mustaches drawn on otherwise pristine magazine models? Despite the mythology of media empires and their mystical power over our helpless consciousness, we have always found ways to talk back to our media.

The digital age has made more apparent something most media scholars have understood for a generation: audiences construct their own media experiences out of the materials the makers publish. The real meaning of media is found in how people swap, discuss, riff off, and sometimes mangle and reconstitute content. This has always been true, but the digital tools of interactivity both encourage and track how people make use of media, alter it by the way we comment on it, even subvert its original intentions.

People have been commenting on public media for centuries. Defacing posters with graffiti, for instance, has found a digital form in drawing on media content on Snapchat and Instagram. And yet the social media apps have been slow to acknowledge this behavior with tools that make media “bombing” easy.

One of the few things in the SXSW Expo hall that impressed me last week was a new private social media app called Graphiti, which lets the user pull images and Web sites from the Web and bomb them with digital graffiti tools.

The app is the brainchild of refugees of the social media world as well as one of the developers of the MMOG Everquest. Graphiti has both social and gaming elements to its interface. You grab or make an image via your own camera, library or an embedded Web browser. The digital spray cans, stencils, markers and overlays pop up from below and let you have at it. Users can share their bombings with friends, who can then add to the remade images. Ideally this becomes a visual exchange where people build on or take over the image thread. Graffiti as conversation.

The makers envision a strong role for marketers in this mix. After all, they are among the most prolific image-makers in the culture. Brands will be able to have their own accounts and distribute tools, images, etc. with which Graphiti members can play. No brands were officially on board when I spoke with the team at SXSW, but it certainly looks like the kind of environment braver brands will want to try.

For the time being, Graphiti is a closed network, in that people do not broadcast their bombings to Facebook, Twitter or Instagram. Of course building any new social net is a daunting climb. This may be an approach and a technology that one of the messaging or social apps will want to acquire and integrate.

Still, the app underscores one of the challenges the messaging apps especially face. Apps like Kik, Tango, Snapchat and others have been trying to find ways of incorporating traditional media into their mix. Of course, many of them would like to see themselves as platforms like Facebook, where people discover and swap media. But most of these apps in my experience don’t make it easy for people to grab and play with media content very effectively. Graphiti comes closer.

In fact, it highlights one of the places digital media has lagged by not creating tools that let us mash up the relentless torrent of content this era has unleashed. We don’t just want to consume information. We want to reshape, rethink and sometimes deface it meaningfully. Yes, we still enjoy drawing mustaches on fashion models.