Future 'Iconic Moments' Coming To A Tablet Near You 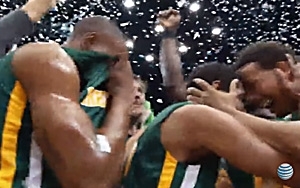 The future might not be televised, per se, but it’s very likely to be viewed on a screen somewhere.

In a new campaign touting its U-Verse TV service, AT&T shows off a time in which it brings the water cooler moments of the future to consumers, wherever they are. Using the tagline, “Where will you be,” the campaign depicts upcoming potential iconic moments that in the past would have been viewed on television and puts them on different screens. The campaign was developed by Organic and AT&T’s agency, BBDO.

“We had been bantering about the idea that there are moments in history where you see some event live on TV,” Valerie Vargas, vice president of advertising and marketing communications, tells Marketing Daily. “The team flipped that on its head and instead of looking it from a historical standpoint, looked at it from the future.”

One spot, for instance, depicts humans landing on Mars. As the camera view shifts from showing an astronaut leaving the spacecraft to stepping on the Red Planet’s surface, the scene shifts to a woman watching the happenings on a tablet, far from a living room. Onscreen text notes AT&T’s product has more live television channels on-the-go than cable offerings. A second spot shows “the greatest moment in March Madness history” when a 16-seeded team beats a No. 1-seeded team (which has never happened). In the spot, a man watches the celebration on a tablet in his car.

“What better example of a groundbreaking moment that could happen?” Vargas says. “It’s truly the best demonstration of the idea that U-verse revolves around you.”

The campaign, which launched in conjunction with the NCAA Basketball Tournament (of which AT&T is a sponsor) will also include a dedicated microsite where consumers can find user-generated content, as well as films, gifs and graphics created from that content.