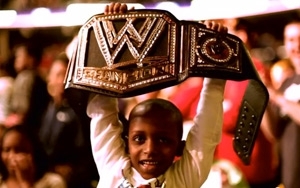 Long a staple of NBC’s USA Network, the network’s WWE programming franchise will get a broad marketing campaign across many NBCUniversal properties.

The campaign, called “For The Hero In All of Us,” will air across NBCUniversal’s two broadcast networks, 17 cable channels and more than 50 digital properties. Fans will be invited through social media to name their favorite WWE performers and share stories.

The spot -- which taps into its “TV-PG family-centric, multigenerational and multicultural audience” -- features close-up, dramatic, slow-motion shots of WWE stars on the ring and views of a cheering crowd, as well as performers signing autographs with its fans.

Part of a voiceover in a minute-long spot says: “There is something great in all of us, that inspires us. It’s why when we fall, we get up again. That’s why we give back.”

NBC says the effort is partially intended as a push for new ways for TV advertisers to work with WWE across many media platforms -- including in-show integration and social media campaigns -- as well as lead-up programming to its longtime “Wrestlemania” event.

“Our new campaign illustrates all that is great about the WWE brand from our charismatic and athletic superstars to our multigenerational and multicultural audience, and our commitment to giving back,” stated Michelle Wilson, chief revenue and marketing officer of WWE.

Among other efforts, WWE recently launched its first standalone over-the-top digital TV service that has over performed in terms of subscribers according to the company.