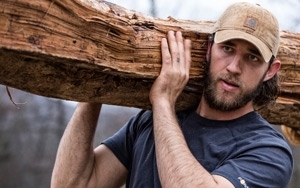 The 25-year-old North Carolina native, who was named MVP of the 2014 World Series, takes care of a ranch in his hometown of Lenoir in the offseason. The production crew simply followed Bumgarner around his home doing chores to get footage for the spot, which also features men in other professions who wear Carhartt.

Bumgarner was a natural fit because he grew up wearing the Carhartt brand, says Tony Ambroza, senior vice president of marketing at Dearborn, Mich.-based Carhartt.

“Carhartt did not partner with Madison because he’s an accomplished athlete; we partnered with him because he’s a hard worker off the field,” Ambroza tells Marketing Daily. “In the offseason, Bumgarner cares for livestock, maintains 100 acres of property and fixes pretty much whatever needs to be repaired.”

The spots show that before there were “workouts,” there was just “work.” Men who wear Carhartt don’t need to take spin classes, according to a line in the 60-second TV spot, which shows a quick cut of a man pedaling a stationary bike furiously before cutting back to “real” men getting a “real” workout, including Bumgarner cutting down a tree and casually walking away as it falls.

The brand has had an informal relationship with Bumgarner for several years, Ambroza says.

“It began in 2013 when he hosted 29 members of the Giants’ grounds crew at a BBQ lunch in appreciation of the crew’s hard work in keeping the playing field in excellent condition during the baseball season,” Ambroza says. “In addition to lunch, each crew member was given a collection of Carhartt apparel to assist them in doing their jobs in future seasons.”

The commercial was produced and directed by actor Jason Momoa and his production company, Pride of Gypsies. Momoa is best known for his acting roles on HBO’s “Game of Thrones” and in “Conan the Barbarian.”

This is Momoa’s directorial debut for a commercial and Carhartt also plans to have him direct its fall 2015 commercial. Bumgarner could return in the future as well.

“We really enjoy working with Madison because when he takes his uniform off when the season is over, he puts on Carhartt to work on his ranch,” Ambroza says. “It’s not out of the realm of possibility that we will work with him again.”