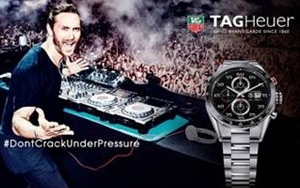 David Guetta is the number one most followed DJ on social media with 60 million fans on Facebook and 14 million on Twitter.

“We need someone like David, in touch with his time and connected to his fans, to help us recapture today’s youth.” says Jean-Claude Biver, Tag Heuer’s CEO and President of LVMH’s watch division.

The first stage of this partnership kicks off with a global advertising campaign running across print ads, billboards, and online with exclusive content and events. The creative features images during David Guetta’s last performance in Rio de Janeiro, Brazil in front of thousands of people. Noted photographer Ellen von Unwerth helmed the footage. The creative will support the brand's new #DontCrackUnderPressure messaging that presents the brand as "unafraid of challenges, who wishes to broadcast previously unaccomplished performances, which cannot help itself but move forward, and defines its own rules."

Then Tag Heuer will launch a David Guetta special-edition watch that adjusts to all time zones thanks to its GMT function and “day/night” symbol. Third, Tag Heuer will be featured as part of the star DJ’s Ibiza residency this summer. Lastly, Tag Heuer also signed a deal with two sister DJs Nervo and will host additional projects in Ibiza this summer.

“A brand aiming at expending its audience, especially towards younger consumers, has every interest in steering towards the EDM world," says Raphael Aflalo, CEO My Love Affair.

Meanwhile, David Guetta is one of the three global Ambassador - with Cristiano Ronaldo and Cara Delevigne - that will represent the brand in upcoming campaigns.