Interactive Medea Liquor Bottles? There's An App For That 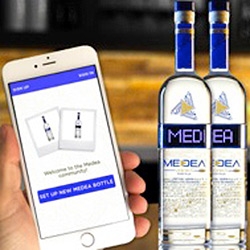 There’s a new contender in the never-ending battle for hipster vodka dominance, armed with interactive bottles.

Yep, you read that right: Medea, Inc. is producing a new premium vodka with an LED message band incorporated into the bottle, which allows imbibers to display messages sent from their mobile devices via Bluetooth.

The new interactive bottles are set to light up bars and premium spirits retailers beginning in June.

Medea has previously sold bottles with LED strips that could carry messages, but these had to be manually programmed by pressing buttons on the back of the display. The new, interactive bottles can be programmed using the Medea App, based on Apple’s iBeacon Bluetooth technology. Users can program the bottles to show static or scrolling messages.

The app is able to locate the interactive bottles and identify those which are available for “registration” (meaning, not already taken) without having to connect with other Bluetooth devices, saving time and device power. At the same time, the app collects consumer information for Medea to boost engagement with its customers, including email addresses.

Medea pointed to a number of capabilities that promise to enliven the nightlife experience, including  enabling a group of friends to converse electronically through bottles, connecting the bottles to social media apps like Facebook or Twitter, or sending email messages via the bottle.

The bottles are pre-programmed with common celebratory phrases like “Happy Birthday” and “Congratulations.”

Nightlife establishments can use the app to program promotional or marketing messages into bottles, or simply draw attention to back bar displays. The bottles of vodka will sell for $29.99 at retail venues.