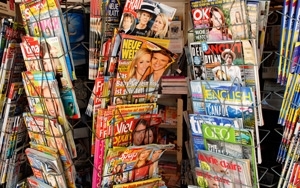 Audience growth was driven largely by increases in the total video audience, which rose 18.7%, and magazines’ mobile audience, which soared 78% compared to the year before.

Mobile readers increased from 14% of the total audience to 22% over the same period. Their gross Web audience, including desktop and laptop, increased 6.9% over February 2014 -- but in proportional terms, the Web audience actually shrank from 17% to 16%.

The list of magazines with the biggest gross audiences was led by ESPN The Magazine, with a gross audience of 92.8 million in February 2015, due to its combination of Web (25.4 million), mobile (40.3 million), and video (11.8 million) audiences. In second place was People at 85 million. With a strong performance across digital channels, it also boasted a print audience of 44 million.

The MPA’s report on magazine audiences comes not long after figures showing strong online growth for the traditional media cousins in the newspaper business.