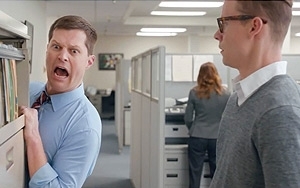 Last year, Angie's List, a local services marketplace and provider of reviews, began to shift its marketing focus from solely driving member growth to increasing the number of transactions on its marketplace.

Now, Angie's List and agency Bradley and Montgomery (BaM) are launching a national TV campaign that refreshes the brand's positioning. It showcases how the “New Angie’s List” can help make home projects a snap for anyone.

But this is the first time the ads don't concentrate on company founder Angie Hicks as the brand's spokesperson. Instead, Hicks only appears in the closing seconds of each spot.

"This campaign needed to shake up almost two decades worth of preconceived notions of what consumers think Angie’s List does," says Brian Harris, creative director at Bradley and Montgomery. "Using surprising humor for the brand, the campaign centers around the idea of ease, where the customer is ultimately delighted by how hassle-free Angie’s List makes projects around the home."

The first 30-second TV spot spotlights the newly introduced SnapFix feature in a highly comical and relatable way. It portrays a homeowner whose fear of ladders and hatred for gutter cleaning is put at ease when his wife hires a professional through Angie’s List. When the acrophobic homeowner replies, “But we’re not members,” his wife responds, “We don’t have to be to use their new SnapFix feature.”

Spots are airing on more than 30 stations across national networks and regional cable channels, including HGTV, USA, CNN, CBS and NBC.

“People think they know Angie’s List, but with several new service offerings, it was apparent that there was a need to develop ads that persuaded audiences to think again,” said Harris. “Through the use of humor and master storytelling, a break-through campaign was created to not only capture the consumers’ attention, but communicate the changes in a compelling way.”

Even though she has been the face of the brand, Hicks was fine with taking a back seat, says Harris. "It was a strategic decision to give the 'new Angie’s List' message room to land. However, her importance to the brand is still evident in terms of brand recognition, and the fact that she is highly involved in the day-to-day marketing decision making. She was completely on board with the decision to reduce her role in the current spots to place added focus on the new brand."