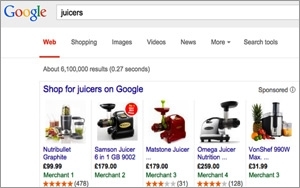 Google's little gold stars that show how consumers rate products will now appear in the United Kingdom, France and Germany. The rating system initially launched in the United States last year. The reviews appear in the form of stars, up to five, along with feedback.

While the ratings show consumers how others rate the products, the stars also determine where the ad listing appears in search results in Google Shopping. Google will aggregate data in Europe from merchants, third-party aggregators, editorial sites and users, Archana Kannan, a product manager for Google Shopping, explains in a blog post. Third-party companies that aggregate reviews like Bazaarvoice, PowerReviews, Verified Reviews, Yotpo, Trustpilot, among others.

Kannan explains that since the rating system launched in the U.S. July 2014, Google has seen an average click-through rate increase of 5% on Product Listing Ads with product ratings.

Just because a product has reviews doesn't mean the reviews will serve up in the sponsored advertisement. Google requires merchants to submit reviews by completing a products rating interest form. The information gets reviews to determine if and how Google can collect the company's product reviews. All product reviews must comply with Google's product ratings program policies.

While Amazon made rating systems popular across its marketplace, many online retail stores like Anthropologie, Nordstrom and Neiman Marcus ask consumers to rate and review products they buy and the experience they have on their site. It not only helps retailers organize specific backend criteria for on-site searches and integrates a social sharing feature to market the brands and retailer.