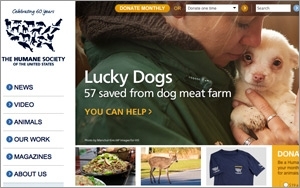 Now that the Humane Society of the U.S. (HSUS) has received a "generous" grant from the non-profit Maddie’s Fund, the organization is able to launch its first paid advertising campaign to expose what it says are the consequences associated with inadvertently supporting puppy mills.

Starting in May, HSUS and ad agency Rokkan are introducing this educational campaign that includes strategy, creative, paid media and other above and below-the-line activations. Rokkan was selected after winning a formal pitch review.

“As an organization committed to improving animal welfare, it was important for us to work with a group of like-minded individuals, and we’ve found that in Rokkan," says Melanie Kahn, senior director for the “Stop Puppy Mills” Campaign, HSUS. "We’re looking forward to kicking off this campaign and raising awareness of the danger of supporting puppy mills.”

The campaign is primarily digital, acting as a foundation that will support experiential and other off-line initiatives.

The messaging is designed to change behavior and create the next big movement in how people think about their pets. Many people who are looking to bring pets into their families are simply not aware that they are perpetuating the puppy mill system.

“It’s a rare opportunity to find a project that you feel passionate about, and it’s for a great cause. My own dog, May, was rescued from a puppy mill, so this really hits close to home for me,” said Charles Bae, CCO of Rokkan. “We’re taking this project personally, so Rokkan will be creating it end-to-end. With the rise of YouTube pet stars and the Internet animal craze, the timing couldn’t be more perfect to talk about the real issues behind the ‘commerce of cuteness’ in a meaningful and unexpected way.”

This grant from Maddie's Fund has regularly helped the organization fund its advocacy efforts. In 2009, for instance, the HSUS teamed with the Ad Council for the Shelter Pet Project, which was the first time that the Council supported an animal welfare cause.

Rokkan, part of Publicis Groupe, landed more than 15 new clients in 2014, and launched its paid media arm earlier in 2014, headed by Lindsay Williams, VP of Media and Analytics.

Meanwhile, the HSUS is the nation’s largest provider of hands-on services for animals, caring for more than 100,000 animals each year, and aims to prevent cruelty to millions more through its advocacy campaigns.