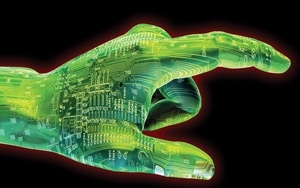 Collaborations like the one with J&J could prompt Google to spin off a biotech company within the next few years to support many healthcare efforts, from self-driving cars to "smart" contact lenses. It has the engineering and partnership support. Some might call it biomedical engineering.

This week, the U.S. Patent & Trademark Office granted Google a patent describing a sensor in a lens that could monitor glucose, among other things. Novartis formed a partnership with the company in 2014, to make a glucose-monitoring contact lens for diabetics.

It's plausible that companies in the healthcare industry would convince Google to form a joint venture to improve the bio-tech and the healthcare industries, said Kevin Lee, founders of Didit, and wecare.com, as well as nearly 10 other companies throughout his career. "It needs to be a significant venture, and all would need to contribute assets," he said. "When you start generating revenue models, different from your core business, you can make a case for spinning off the company."

Lee points to nanotechnology that contributes to mini-robotics as a huge opportunity in robotics assisted biotech. Google has acquired an army of companies with robotic technologies in the past two years -- namely eight. Aside from surgeries, robotics would advance self-driving cars. He also noted that Google co-founders have said the company would act like a venture capitalist and make bets on new investments.

Google co-founder Sergei Brin has been interested in healthcare for some time. His former wife founded 23andme, a saliva-based DNA service. It provides genetic reports on ancestry, family history and help you connect with your DNA relatives.

Collaborations between technology and healthcare could also create wearable technologies and a medical research platform, similar to Apple's ResearchKit.

As for Google and J&J, the collaboration would create minimally invasive robotic-assisted surgery, relying on technology to give surgeons greater control, access and accuracy during surgical procedures, and minimizing trauma and scarring for patients.