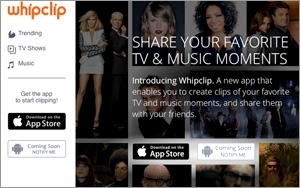 While much has been made of “social TV,” one conundrum that gets in the way is the fact that fans can’t really share content protected by intellectual property laws. However, a new mobile app, Whipclip, is aiming to solve that problem -- at least in part -- by getting content providers to sign off on content sharing in a controlled environment.

The mobile app allows users to legally create their own video clips of live TV shows and music videos, then share them on social platforms, including Facebook, Twitter, Tumblr and Pinterest, as well as via email and SMS.

The clips are legal to share because content owners have already agreed to allow sharing as part of a viral promotional strategy, driving traffic to their properties.

Users can “clip” live TV or search previous episodes in a program for specific moments they want to share. By enabling legal sharing, the app allows fans to select and send higher-quality video. Whipclip has partnered with TV networks -- including Comedy Central (its debut partner), ABC, CBS, Fox, VH1, A&E, and Lifetime -- as well as music companies, including Universal and Sony.

The legal clip-sharing has also been integrated with a wide range of programs, including "Bob’s Burgers," "Castle," "Dancing With the Stars," The Late Late Show with James Corden" and "NCIS: Los Angeles," among others.

The app’s built-in social component also allows users to discover and watch clips by “following” friends or celebrities on the app. On the publisher side, Whipclip provides tracking and analytics so content owners can see what content is being shared across social media.