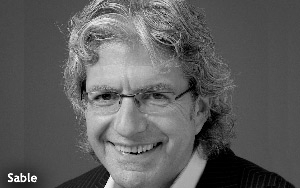 While mobile devices increasingly are used by people as remotes to run their daily lives that doesn’t necessarily mean that companies should adopt “mobile first” marketing strategies. At least that’s what David Sable believes.

Sable, the global CEO of WPP’s global advertising network, Y&R, told attendees at an IAB mobile conference in New York Monday that mobile is just one of many distribution channels that marketers and agencies can use to tell to their stories.

“Should we be digital first or mobile first?” Sable asked the IAB crowd. It was a rhetorical question that he answered with “no, that is very wrong. It’s people first -- get with the program.”

The bottom line, he said, is that “storytelling trumps” when it comes to brand marketing. Algorithms are important, he added, while suggesting that the role of Big Data has probably been overblown.

Sable recalled a recent conversation with direct marketing pioneer Lester Wunderman, a mentor of his and the founder of the Wunderman agency that is now part of the Y&R Network Group. (Wunderman, now 94, still comes into the office most weeks.) The gist was that consumers would “sleep a lot better at night” if they knew how little most of the data they generate matters to anyone, including marketers.

And algorithms are not very helpful at all in some areas, like highly appealing content creation, said Sable -- noting that Amazon found that out the hard way. When initial programs it created, based partly on algorithmic formulas flopped, it switched gears and spent hundreds of millions on top talent. The result? Hits like “Transparent.”

With all that said, mobile devices have a huge positive impact on many lives worldwide, Sable acknowledged. And in many regions, the majority of phones are basic phones, not smartphones. But users still have access to the Internet and search engines. In India, basic phone users do it via texting. According to Y&R research, 60% of respondents in a multinational survey said they believed mobile “is about freedom.” Nearly as many consider themselves “global citizens,” who are concerned with what’s going on in cultures beyond their own.

“Not everything is digital,” Sable said. “The real world is more powerful than ever.” Many consumers, he said, will always prefer the brick-and-mortar shopping experience where they can see and feel the goods. That’s why digital behemoths like Amazon and Google are opening stores.

“It’s not about digital versus non-digital. It’s about what people want to do and are about.”