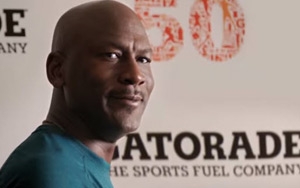 On April 1, Gatorade released the fifth and final video in its 50th-anniversary #BeLikeMike revival campaign.

The VML-created 60-second campaign capstone video, “We All Still Want To #BeLikeMike,” is the only one to include current footage of NBA legend Michael Jordan — along with clips of 10 of Gatorade's athlete brand representatives, Zach LaVine's winning "Space Jam" dunk in the 2015 NBA Slam Dunk contest, and actor/musician Nick Cannon.

Supported by a full-page takeover on the NBA section of ESPN.com, the video pulled more than 1.2 million views in its first day on YouTube, Facebook and Twitter, and the count as of the morning of April 3 is up to nearly 2.2 million.

In total, as of April 2, the campaign's five videos had generated just under 21.5 million views across those channels, according to the brand.

"A true testament to the impact this campaign has had on consumers came in the form of a social media post from the Gatorade Facebook page, noting that the most recent 'Still Want to #BeLikeMike' video really connects the superhero (Jordan) to every day youth athletes across generations," Gatorade's CMO Morgan Flatley tells Marketing Daily. "This is everything Gatorade hoped the original ad would do more than 23 years ago, and we’re glad to see that it still holds true."

The campaign was launched in February with a digitally remastered version of Bayer Bess Vanderwarker's original 1991 "I Like Mike" Gatorade ad. The only one of the five #BeLikeMike videos to be run as a TV commercial, the remastered video aired during NBA All-Star Weekend. (It was showing more than 3.5 million views on YouTube as of the morning of April 3.) Gatorade also hosted a live event in New York during the All-Star weekend, featuring retired NBA stars Dominique Wilkins and Horace Grant.

Three subsequent videos from TBWA\Chiat\Day, each featuring clip tributes from other athletes and social posts from fans, debuted on YouTube on March 18: "Move Like Mike," "Dream Like Mike" and "Groove Like Mike." On YouTube alone, "Groove" is currently showing nearly 7 million views, while "Move" and "Dream" are showing 4.4 million and 4 million, respectively.