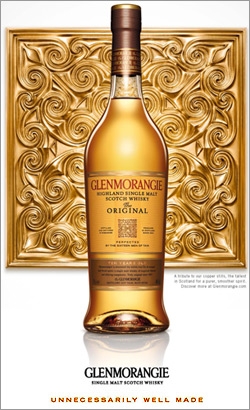 Glenmorangie and its agency BSUR are launching a new global advertising campaign that spotlights Glenmorangie's emblem, suggesting that this premium Scotch whiskey brand does not need bells and whistles or celebrity endorsements to sell itself.

The creative features images of Glenmorangie Original photographed in front of the brand’s emblem, the "Signet," handcarved in oak and also recreated in solid copper.

This unique emblem is the kaleidoscopic swirling pattern from the lower panel of one of Europe’s most important sculptures.

Alongside the image in the advertising appears the tagline “Unnecessarily Well Made” -- which refers to the unseen lengths that are undertaken behind the scenes -- the expertise and craftsmanship that goes into its award-winning single malt Scotch.

The campaign relies on the brand's heritage to serve as its point of differentiation. Few competitors, the marketer contends, are as authentic. At least that’s the positioning.

Founded in 1843, Glenmorangie Single Malt Scotch Whisky originates in the Scottish Highlands and is distilled in the tallest malt whisky stills in Scotland, according to the distiller.

The campaign runs across print and out-of-home media worldwide, including the U.S., China, and Europe. The brand is also introducing "Unseen From Glenmorangie," a new online quarterly publication that will delve into the brand's history.

The first edition features interviews with those involved in this advertising campaign: Ian Agrell, the master woodcarver, Pierre Matter the sculptor, and the still-life photographer, Olivier Arnaud, who created the advertising images, and who talks about his work with Glenmorangie: “I came to very much admire the Glenmorangie culture, the idea that things should be Unnecessarily Well Made. It’s what you do, but it’s not necessarily visible.”

Amsterdam-based BSUR has worked with Glenmorangie, which is owned by Europe's luxury conglomerate LVMH, since 2013.