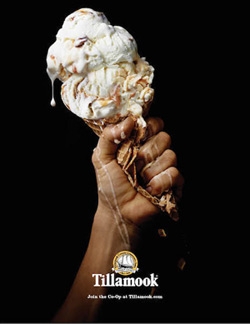 Last month, 72andSunny launched the Brand Citizenship division to “identify sustainable products and services for brands and build long-term programs to bring them to life.”

Now, 72andSunny is introducing its first work under this new label for the Tillamook County Creamery Association, a farmer-owned co-op dairy from Tillamook County, Oregon.

Adhering to the Brand Citizenship goals, the Tillamook Co-Op is designed to do good by fueling the “real food” movement to give users the ability to influence their food choices and focus on sustainable food, local agriculture and natural ingredients.

People sign up at Tillamook.com/co-op to become members and receive voting rights, access to Co-Op Member meetings, and the ability to submit their own product idea. Later, members will be invited to exclusive foodie events. Membership is free and each new member also gets $5 to invest in independent entrepreneurs focused on sustainable farming, through a microloan program powered by KivaZip.

This marks the first time the 106-year-old farmer-owned co-op is giving away this kind of control to its customers. In fact, no dairy company has ever allowed users to retain this level of involvement, say executives involved in the campaign.

While the Internet serves as a force for good, there are times when things shift beyond the expected. Still, executives are excited to introduce an initiative that truly connects with fans.

Meanwhile, this Co-Op is part of the larger “Dairy Done Right” campaign that promises transparency and innovation by involving people in their foods’ travel from farm to table and reformulating products to raise the standards in dairy. This national “Dairy Done Right” campaign includes television, print and online ads that show "daring, visceral images of Tillamook products."

This campaign is part of Tillamook's attempt to increase national awareness and higher profile as it expands its product line and distribution. To help achieve that, the creamery appointed 72andSunny as its lead agency handling all creative and strategic duties in November of last year.