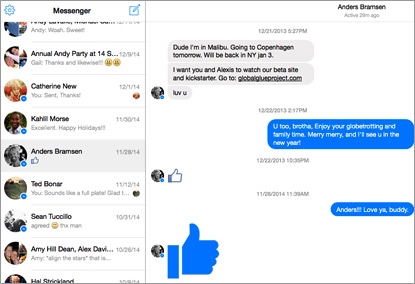 While the future may be mobile, Facebook continues to develop its desktop business. The social giant just debuted Messenger.com -- a standalone Web site where users can chat away to their hearts’ content.

Of course, users can already do this on Facebook’s flagship Web property, Facebook.com, but breaking its services into distinct properties has become the company’s modus operandi.

The social giant is widely believed to be siloing its services to give each more room to grow and to create additional revenue streams. On the mobile front, Facebook has been aggressively pursuing an app diversification game plan, which most famously involved separating Messenger from its core app.

Last year, Facebook drew significant criticism for forcing users to download a distinct Messenger app. Just three months after the change, however, the Messenger app had been downloaded more than 500 million times.

CEO Mark Zuckerberg used a “town hall” meeting to address the diversification strategy, last year. “On mobile, each app can really focus on doing one thing well, we think, and the primary focus of the Facebook app, today, is News Feed.”

At the time, Zuckerberg admitted that requiring more than 1 billion users to install a separate messaging app was a “big ask.” Yet even though “it was a short-term painful thing to ask people to install [another app], we knew we could never deliver the [right] quality experience as just a tab in the main Facebook app."

Facebook clearly has big plans its Messenger service. Last month, it officially turned the service into a platform for developers to directly distribute their apps to Messenger’s roughly 600 million users.

Brands and agencies welcomed word of the new Businesses on Messenger service.

“Brands will now be able to communicate directly with customers in threaded conversations on an integrated platform, which will enhance customer care and improve shopper experiences,” Elizabeth Closmore, global head of product evangelism, strategy and partnerships at Sprinklr, said at the time.

At present, Facebook has no plans to remove its Messenger feature from Facebook.com.