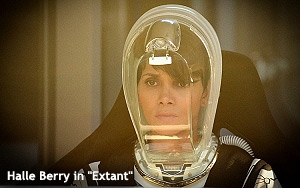 The summer TV season is fast becoming a showcase for sci-fi.

It has been years, of course, since the summer months were known only for reruns. But the evolution of the summer season into something other than a rerun backwater has taken several forms -- and in many ways, is still a work in progress.

A number of shows have long established themselves as bona fide summer hits, including “Big Brother” on CBS, “So You Think You Can Dance?” on Fox and “America’s Got Talent” on NBC, to name a few. It wasn’t too long ago that such shows could look forward to “graduating” to the “regular” season if they did extra-well in summer. But in recent years, summer hits tend to stay on the summer lineups.

More recently, the networks have been developing scripted series for the summer months, with some of the more high-profile of these summer series delving into futuristic or science-fiction topics.

There are not enough of them to make a blanket declaration that summer TV is being overrun with sci-fi shows, but it is interesting -- and probably not a coincidence -- that so many of these scripted sci-fi series are being produced especially for the summer season.

Perhaps they are seen as a form of escapism that is more in line with the general mood of the summer viewing audience than other forms of scripted TV. One network that seems to feel this way is CBS, which is far and away the most prolific developer of summer sci-fi fare.

This summer, CBS will have the third summer season of “Under the Dome,” based on the Stephen King bestseller about a small town whose residents are trapped under an invisible dome; the second summer season of “Extant,” starring Halle Berry as an astronaut trying to prevent the end of the world; and the first season of a new series called “Zoo.”

“Zoo” is based on a James Patterson book about a sudden and unprecedented wave of violent attacks against humans being committed around the world by animals.

While CBS’s summer slate is filling up with these kinds of shows, they are less prevalent on the other networks.

Still, HBO will have the second season of “The Leftovers,” the series based on the book of the same name by Tom Perrotta about the sudden, simultaneous disappearance of thousands of ordinary people and the family members and loved ones they left behind (the “leftovers” of the title).

ABC recently announced a scripted summer series called “The Whispers,” about an unseen “imaginary friend” who seems to be manipulating, and trying to influence, the small children of the rich and powerful in contemporary Washington, D.C. And FX will have Season Two of “The Strain,” about a mysterious epidemic.

And last but definitely not least: The third installment in Syfy’s “Sharknado” series is scheduled to air on July 22. Formally titled “Sharknado 3: Oh Hell No!,” this one will have the entire Eastern Seaboard of the United States (below Washington) threatened by a super-sharknado that will wreak havoc on multiple cities.

A “sharknado,” of course, is a fictional weather phenomenon in which a super-tornado positioned offshore and over the ocean generates enough energy to suck man-eating sharks out of the water and then deposit them -- flapping around and very hungry -- on the streets of coastal America.

The question is: Does “Sharknado” qualify as science fiction? The answer: How should I know?