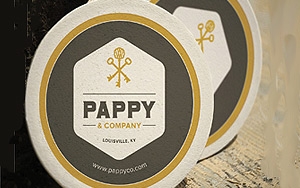 The Van Winkle family knows bourbon. They established the Old Rip Van Winkle Distillery many decades ago and continue to produce what some believe are among the finest and most expensive bourbons in the world.

Now, the three daughters of Julian Van Winkle III, president of Old Rip Van Winkle Distillery, are hoping to extend the family enterprise with Pappy & Company, a brand offering bourbon lifestyle-inspired goods and wares, such as cigars, furniture and food.

"Pappy & Company is a family business and one that carries the responsibility to live up to the Pappy legacy and heritage," says Dave Knox, Chief Marketing Officer, Rockfish.

"As Rockfish worked to design the brand identity and then tell that story in the new Web site, it was essential that we based our choices on that shared legacy. Pappy & Company is about carrying on the tradition of their great-grandfather, who is famous for saying, 'We make fine bourbon…at a profit if we can, at a loss if we must…but always a fine bourbon.''

The Pappy brand centers around the e-commerce site that was developed to work seamlessly across desktop, mobile and tablet devices..

The site's content promotes the history and back story of the brand. Product descriptions, for instance, give shoppers the story behind a product, allowing glimpses into the sisters’ hand-selection and curation of goods. This is continued throughout the site in “The Bourbon Lifestyle” blog, which allows readers a peek into Van Winkle family traditions, including recipes for Julian Van Winkle’s Manhattan (the “Vanhattan”) and chocolate bourbon pecan pie.

The Van Winkles addressed that challenge when they said this is meant to be "a line of fine products, all made with the same dedication to taste, quality and style that their great- grandfather’s original vision embodied.”

Color is key to uniting the various components of the brand. Hence, the site uses warm, bourbon-tinged colors and a clean, classic look and feel to reflect the company’s Southern roots and this thematic coloring runs across all design elements.

Rockfish also designed the company’s symbolic logo, which is featured prominently on the site. The three keys at the center of the logo represent the founding sisters and are reminiscent of the five keys that hung outside the Stitzel-Weller Distillery (the predecessor to Old Rip Van Winkle Distillery) — keys that represented the five steps in the making of bourbon as well as a symbol of hospitality. The top key includes a “VW,” for Van Winkle, a further nod to the family heritage.

One of the challenges in these executions of course, was capturing the heritage and history of the Van Winkle family and Old Rip Van Winkle Distillery while establishing Pappy & Company as its own unique brand. To that end, the logo and brand identity are meant to speak to Pappy & Company’s vision that its products are exclusive and stylish, yet “not stuffy” while representing a new kind of Southern hospitality.

“The Pappy & Company brand exudes personality, history and a lifestyle that every bourbon fan wants to be a part of,” says Knox. “We brought this into focus at every consumer touch point, from the content to the shopping experience to the branding itself.”

There was not a formal review and the agency only reps Pappy & Company, which operates separately from Old Rip Van Winkle and the bourbon brands themselves.