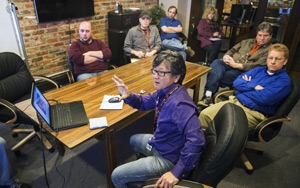 The company best known as one of the largest printer of payment checks has expanded its repertoire to include marketing services for small businesses.

A campaign, with Shark Tank’s Robert Herjavec as the spokesman, aims to move ahead the public perception that it’s only a check company. Services provided by Shoreview, Minn.-based Deluxe range from logo design to web development to e-marketing.

Deluxe enlisted award-winning documentary makers, whose works have appeared in Time and National Geographic. A dedicated website chronicles the effort at SmallBusinessRevolution.org.

Businesses include a Texas ranch whose horses help heal traumatized kids, a  Chicago couple whose vintage shop revitalized a neighborhood and a Desert Storm veteran in Louisiana who provides service dogs to veterans.

During National Small Business Week, May 4-8, Herjavec will also help Deluxe kick off a contest in which consumers can nominate their favorite small businesses for a $25,000 prize.

The campaign includes 12 short films and 88 photo essays, highlights of which will be compiled into a 22-minute documentary in late 2015.

“Deluxe is a proud champion of small businesses, and the Small Business Revolution is our way of celebrating those people who work tirelessly to follow their dreams,” said Amanda Brinkman, chief brand and communications officer for Deluxe, in a release.