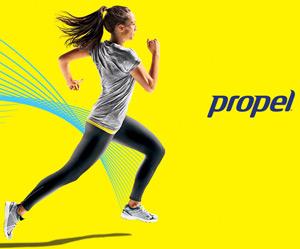 Debuting this week, the new campaign sets out to “lyte up” fitness routines with a multifaceted campaign running across TV, video, digital, print, social, and search through October.

In all, they are meant to target what the agency describes as "passionate exercisers," such as yoga enthusiasts, runners, bikers, cross-fitters and spinners. It's geared essentially to "anyone who approaches fitness with a thirst for personal improvement and a motivation for knowledge.”

“This campaign was designed to highlight the spirit of fitness. We recognize that for this fitness consumer, it’s more than a philosophy; it’s a way of life,” said Brett O’Brien, senior vice president and GM, Gatorade and Propel.

The creative focuses on the water's performance enhancements. Hence, ads show how hardcore athletes need to hydrate in order to enjoy their workouts. "Propel is changing the conversation – differentiating the brand from the competition – by highlighting the importance of electrolytes to support better hydration and not just taste," say agency executives.

"Breaking the mold of the fitness/sport category, which are often visually hard-core, intense, even brooding, the campaign embodies the spark that is created when you work out – the vibrancy, optimism, excitement and energy of being alive and active."

The cycle video ad can be seen here and the cross train video here.

Sound is another key aspect of this campaign. Since music is an essential part of the workout process, executives particularly focused on the auditory experience in launching this initiative.

From April 1 through June 30, Propel will give users the ability to save their iTunes music playlists to every workout with the intent that users can check back to see which songs energized them.

There’s another component--in partnership with Spotify, Propel is launching a music app on June 1 that allows users to enter their intensity levels and length of their workouts. The app will use these details to create custom workout playlists.

And Propel will sponsor workout-themed music stations created by the Pandora Curation team, in addition to the full-screen rich media Welcome Interstitial when the Pandora app is launched on iPhone or Android. Propel is one of the few partners selected to test Pandora’s Sponsored listening experience and will participate from June 15 – June 28.