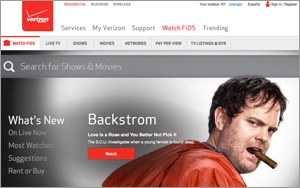 Verizon FiOS is offering “Custom TV” -- another effort by traditional TV providers to move toward “a la carte” selling of TV channels, all in the wake of growing “cord-cutting” worries.

Verizon will sell a smaller package of channels under Custom TV -- around 35 -- much smaller than the approximately 150 to 300 that traditional TV providers offer -- for as low as $55 a month.

Customers for Custom TV get a base of broadcast channels, as well as CNN, HGTV, AMC, Food Network, plus two kinds of “Channel Packs” -- different categories of channels -- kids, lifestyle, news and info, sports, pop culture, and entertainment. Customers can add on more group of channels for $10 each.

Dish Network Sling TV, an Internet-based stand-alone TV service, offers a $20-a-month package for a slim number of TV channels, although no broadcast channels. Customers can add on groups of channels for $10 per month; as well as HBO for $15 a month.