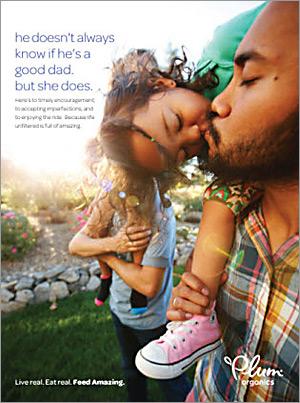 In its first national campaign since launching in 2007, Plum Organics, now the leading organic baby food brand in the U.S., is aiming to catalyze honest, "unfiltered" sharing among parents.

The "Parenting Unfiltered" campaign is designed to acknowledge and celebrate the reality that "parenting is complicated, messy and anything but perfect," says Plum Organics co-founder and CEO Neil Grimmer.

"There's a lot of anxiety about being a parent in the first place," he says, and that's being exacerbated by the unrealistic, relentlessly happy, simplistic portrayals of family life with which parents are bombarded.

"The truth is that 99% of what parents are experiencing in their everyday lives is not reflected in the media, ads or their social media communications," Grimmer continues. "We believe that there's too much pressure on parents to be perfect."

He points out that a 2014 survey by the Current communications agency found 61% of young Millennial moms reporting that they feel pressured to keep up with the digital "Joneses" by posting photos and messages that make their own families and lives look perfect. Furthermore, fully 60% said they were considering cutting the social media cord as a result of that and other social media downsides.

The campaign's strategy, from lead creative agency LeadDog Marketing Group, centers on a Parenting Unfiltered "manifesto" that reads in part: "Parenting. It takes blood, sweat, tears and butt wipes. Embrace it all. If it's too heavy, ask for backup. There are books and blogs, but no scripts. We're all just improvising. Have a good cry in an inappropriate place. Have fun at your own expense (not others'). Have cereal for dinner and call it 'Breakfast Night!"...Parenting comes in so many wonderful styles. Try on several. Admire the rest. Pretending it's all OK is not the same as knowing it's all OK. Find the difference and live it."

The brand is creating #UnfilteredFriday, asking parents to take a holiday from filtering their social posts one day each week: "No pretending, no posed Instagrampics. It’s time to let it all hang out, from blooper vids to challenging parenting decisions to ridiculous Instagram outtakes. And it’s time to celebrate your mini wins."

The campaign's Tumblr-hosted microsite will serve as a hub to drive conversations around #ParentingUnfiltered and #UnfilteredFriday.

The campaign's video, from Stun Creative, features scenes like a mom hiding out in the bathroom to steal a few minutes to read a book, and parents coping with kids who actually cry, as well as some moments of spontaneous joy. It's viewable on the campaign site and YouTube.

Full-page and spread print ads (sample shown above) are appearing in Meredith's American Baby and Fit Pregnancy and other magazines.

The national campaign's stress on relevant content and facilitating networking and solution sharing builds on an approach that's already evident in the community and resources content offered on Plum Organics' main Web site and through its CRM membership program, points out Grimmer.

The approach also parallels the organic brand's natural, transparent positioning, and the company's problem-solving origins: Grimmer started it because, as working parents, he and his wife were exhausted from staying up to cook organic food for their first child.

While Plum Organics is "benefitting in many ways" from the support systems and resources available through Campbell Soup Company, which acquired Plum in May 2013, "it's our results that have allowed us to expand our marketing" this year, says SVP, brand marketing and innovation Ben Mand.

In addition to capturing the #1 organic baby food slot over the past year, the company, which had revenue of roughly $80 million in early 2013, currently has a 6.4% share of the overall $2 billion U.S. baby food category, he reports.

Up to now, Plum Organics' marketing has focused primarily on events and sampling, complemented by its site, CRM program (which includes cross-promotional partnerships with other organic and natural brands), social channels, and some public relations.