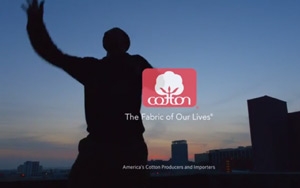 Under increasing pressure from synthetic fabrics, Cotton Inc. is wooing comfort-craving Millennials, stepping away from celebrity endorsers in favor of shareable content.

The campaign, this year’s version of the 26-year-old “Fabric Of Our Lives” effort, is themed “Cotton. It’s Your Favorite for a Reason.” In addition to a series of 15- and 30-second TV commercials, it also has consumer stories on video, as well as a cotton-focused collaboration with Rue La La, the online retailer, and new trade ads.

That the campaign is celebrity-free is a switch from its previous strategy, says a spokesperson for the trade group. (Last year, ads featured “Nashville” star Hayden Panettiere. And the previous campaign starred Emma Rossum, from “Shameless.”) Instead, the DDB-created work focuses on cotton’s authenticity, with fans extolling its comfort, its breathability, fit and feel, which it hopes will appeal to Millennials who crave authenticity.

“This new campaign will focus on many of our favorite clothing items and point out the reasons why we love them and keep on wearing them,” says Ric Hendee, SVP/consumer marketing, in a release. “The campaign uses real stories from real people, and finds a new way to celebrate the cotton in our lives.”

The trade group says the effort is based on research revealing that 69% of consumers it surveyed say their favorite article of clothing is at least 60% cotton. So despite its loss in market share, the group says, “cotton is still something consumers want.”

One of the goals of the campaign is to get shoppers to check fabric labels more consistently, to determine which items do and don’t contain cotton.

In its most recent annual report, Cotton Inc. says it spent $31.4 million on consumer advertising, and the spokesperson says this effort is a central portion of that.