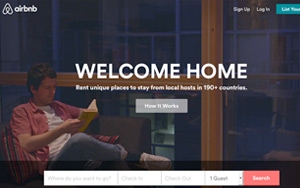 With the latest estimates on the sharing economy hitting the stratosphere, more and more mainstream brands are tiptoeing into the territory carved out by names like Zipcar, Uber and Airbnb.

A new report from PwC says that 57% of American adults are signing on to this “access is the new ownership” sentiment, and 80% of the people it surveyed agree that sometimes, renting is smarter than owning. The consulting company says that the five key sharing sectors, which include travel, car sharing, finance, staffing and music and video streaming, generate $15 billion in revenues now, with the potential to increase to $335 billion by 2025. Some sharing companies already dominate their old-fashioned predecessors, with Airbnb averaging 425,000 guests a night, about 22% more than Hilton Worldwide, it says. And 8% of adults have already had at least one experience with a shared automotive service, such as Uber or Lyft.

The idea of sharing skews younger, and makes the most sense to Millennials.

“It’s not surprising that we’re seeing such brands as Marriott, Best Buy, Toyota, and BWM exploring this territory,” says Suzanne Shelton, CEO of the Shelton Group, a Knoxville, Tenn.-based marketing communications company that specializes in sustainability and environmental trends. “For companies, the question becomes ‘We can make a thousand cars and sell them, but we can also make one car and sell it a thousand times.’ Millennials are especially impatient, she says, and — in their commitment to save money and reduce waste — “just wish companies would figure it out.”

Even areas like apparel are seeing big shifts. ThredUP, the largest online resale shop for women’s and children’s clothing, says venture capitalists are investing more in the online consignment industry, and says brands like Patagonia, H&M and Eileen Fisher have launched resale programs. For women, the hottest sellers on its site are Lululemon, Toms and Dooney & Bourke, while North Face, Matilda Jane and Under Armour top the list of most in-demand brands for kids.