At NAB Vegas Show, Questions And Observations About The Future Of TV 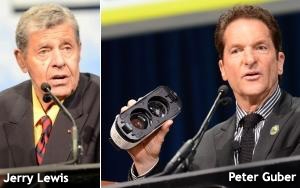 It’s probably true for any industry: The past always collides with the future at these annual industry conventions.

This axiom (which I admit I just made up) was no less true last week at the National Association of Broadcasters’ annual convention in Las Vegas.

The past and future were brought into sharp relief at the convention’s opening session last Monday morning, as 89-year-old Jerry Lewis came onstage to accept a lifetime achievement award (the NAB’s annual Distinguished Service Award).

This was followed by a keynote speech by movie producer Peter Guber, who declared that virtual-reality technology represented the future of not only filmed entertainment, but shopping and other activities that people do in person -- activities they won’t have to leave their homes to do. (That’s Guber in the right-hand photo nearby, alongside a photo of Lewis, flourishing a piece of virtual-reality eyewear that Guber said will change everything.)

In case you’re wondering, Jerry walked onstage assisted by only a cane. He was thin, spry and energetic, and delivered a brief thank-you speech in a strong voice. As for Guber, I didn’t entirely buy his vision of an all-virtual-reality future, but what do I know? He’s Peter Guber, a guy with a long track record of success. So maybe he’s right.

Here are a couple of other trends to ponder -- takeaways from this year’s NAB Show.

1. Innovations in audience measurement are being developed at breakneck speed. Great efforts are being made by many people to build systems that will capture and measure all TV viewing on whatever, and wherever, it is being viewed. I formed the impression, from a handful of panel discussions I attended, that such measurement will be many times more precise than the way most audiences are measured now -- with data about the characteristics of audiences refined all the way down to the individual-viewing level. More than one panelist gave the clear impression that this type of measurement will be here much sooner than later.

2. Content streaming services – from the cable-authenticated “TV Everywhere” scenarios to the “over-the-top” (OTT) subscription model (such as CBS All Access) -- are the talk of the TV industry. The primary question, as with all such innovations: How to monetize them. The answer: Sell advertising (particularly where the TV Everywhere, non-subscription model is concerned). The key to that: Accurate audience measurement (see above item).

3. Another question about streaming services that seemed to be on broadcasters’ minds at the NAB: Where do traditional, local TV affiliates fit in? The TV Everywhere services, in which local cable systems are involved, are designed to encompass and include live streams from local broadcasters. And yet local affiliates seem jittery about new content delivery systems that, conceivably, could bypass or replace them. Broadcasters are nervous about the strength of their relationships to their networks.

4. This broadcasters’ convention has become so large that it’s easy to forget it’s supposed to be about broadcasting. It was almost as if there were two conventions going on. One was the gathering of traditional radio and TV broadcasters who make up the membership of the NAB. They met for luncheons and small panel discussions, as they have been doing for decades at the NAB.

But this convention drew more than 103,000 people (from 164 countries), and most of them, seemingly, were not broadcasters. Instead, they represented the “other” portion of the convention -- the part that has evolved into the largest professional electronics exhibition in the world (this year’s hot gadget: Drones, for use in news-gathering and aerial filmmaking).

At this year’s NAB, more than 1,700 companies filled 1.015 million square feet of exhibition space at the Las Vegas Convention Center. And while broadcasters form part of the customer base for all of the equipment on display, it seemed to an observer as if traditional broadcasters were not necessarily the principal constituency at their own convention.