Sawyer-Jenner Interview Is This Week's Most Talked-About TV Show 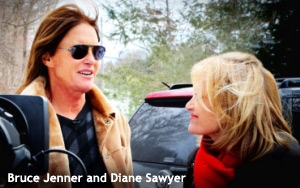 ABC’s two-hour Bruce Jenner special Friday night figures to be the biggest TV show of the week -- if it can deliver on its promise.

That “promise” -- perhaps not spoken but definitely implied -- is that a viewer will come away from this special with a full understanding of what Jenner is going through as he undergoes a sex change (otherwise known these days as “gender reassignment”).

This understanding would include all the ramifications of such a radical decision for a man who has been a man for 65 years -- the effects on himself both emotionally and physically, and on his family -- not least because his family, which is made up of Jenners and Kardashians, is so famous.

Various members of the family are among those interviewed for this special (although ABC won’t say exactly which members), which represents the first interview with Jenner since it became public knowledge some months ago that he is in the midst of this gender transformation.

The show has been titled “Bruce Jenner – The Interview,” and Jenner’s “co-star” on the show is his interviewer, Diane Sawyer. It’s a big “get” for her and ABC, which is giving it a prime-time showcase on Friday night, beginning at 9 Eastern.

In the post-mortems after the show, critics -- both professional and amateur -- will assess the show partly on the basis of how much screen time Jenner gets during the two hours.

Part of the show will be devoted to background reporting on the subject of gender-reassignment generally -- information that is necessary for understanding Jenner’s situation. But the hope is that the time spent on background won’t detract from time spent with Jenner.

He is a subject of fascination to two very different generations for two very different reasons. For those of us of a certain age, he will forever be known as the one-time Olympic decathlon champion who was once considered, by virtue of that achievement, as “the world’s greatest athlete.” When we were young, he was the macho gold-medal winner in the world’s most grueling athletic event, a world-famous athlete on the Wheaties box who is now in the process of becoming a woman.

For a much younger generation born long after Jenner’s Olympic triumph in 1976, he’s the laid-back, somewhat aloof dad on “Keeping Up With the Kardashians.” It is possible that many regular viewers of the reality show are not even aware of his fame many years before the TV show. Indeed, the three Kardashian sisters -- Kourtney, Khloe and Kim -- were not even born then, and it would be years before Bruce married their mother, Kris.

For this week’s special, Sawyer got plenty of time with Jenner, conducting interviews with him in three locations -- Malibu, New York City and Tarrytown, in the suburbs north of New York where Jenner grew up.

The photo nearby shows Jenner and Sawyer in Tarrytown last February. That’s when the interviews were conducted, although they have evidently been saved up for airing during the May ratings sweep.

The interviews were conducted just days before Jenner was involved in a car crash in Malibu on Feb. 7 in which a 70-year-old woman was killed. Sawyer has not had a subsequent opportunity to interview him about the accident, although it will almost certainly be mentioned on the show.

For many viewers who will choose to watch this show, the aim will be to ogle Jenner. They will be keenly interested in seeing up close how he has changed physically, and gain some insight into how he will change even more. They will want to know what stage he is in now in the procedure, and the stages yet to come for this transformation process to become complete.

That’s another thing that critics will likely assess on the morning (or half-minute) after the show airs: Its level of clinical detail. Can I be candid here? Whether viewers will admit this out loud to their friends and family members or not, they will want to know about, um, the status of Jenner’s genitalia. How deeply the special will delve into this issue -- which for many is the crux of the matter --  remains to be seen.

For its part, ABC is releasing no quotations from the interview -- except those that can be transcribed from some promo spots that have begun to air this week. Sawyer is scheduled to make the rounds of ABC’s talk shows on Friday morning to talk up the special --  starting with “Good Morning America” and continuing on “Live with Kelly and Michael” and then “The View.”