Owners Of Hybrids And EV's Are Doing The Math, Then Buying SUVs 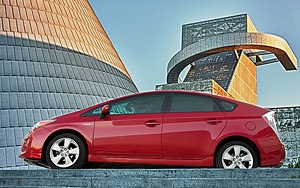 A piece of good news for consumers is bad news for hybrid-car makers. Not only does cheap gasoline hurt sales of alternative fuel vehicles, it erodes hybrid and EV loyalty. That’s because, as gasoline prices drop, people buy bigger cars and trucks with gasoline engines. And that says a lot about people who buy vehicles like Toyota Prius, by far the top-selling hybrid car brand, and the top-selling car in California until last year. It’s not about the karma.

“For better or worse, it looks like many hybrid and EV owners are driven more by financial motives than a responsibility to the environment,” says Edmunds.com director of industry analysis Jessica Caldwell, in a statement. “Three years ago, when gas was at near-record highs, it was a lot easier to rationalize the price premiums on alternative fuel vehicles. But with today’s gas prices as low as they are, the math just doesn’t make a very compelling case.”

With gas prices around $2 and change, shoppers have been buying crossovers in droves. According to Edmunds.com, about 22% of people who traded in their hybrids and EVs in 2015 bought a new SUV, versus 18.8% last year, and 11.9% just three years ago. Edmunds.com also finds that only 45% of this year’s hybrid and EV trade-ins have gone toward the purchase of another alternative fuel vehicle, down from just over 60% in 2012. Edmunds says this is the first time loyalty rates for alt-fuel vehicles have fallen below 50%.

Most hybrid car nameplates saw sales declines in March this year, and almost all saw declines year-to-date through March. Toyota, whose Prius was overtaken in California by Honda Accord last year,  saw a 13.1% drop in March sales of its most popular version of Prius, the Liftback. Year to date through March, during which Toyota sold 23,871 Prius Liftbacks, the company sold 6.5% fewer of the models than in the period last year. Sales were up just slightly for the Prius C, a distant second-place at 8,879 vehicles sold through March. Sales of third-biggest seller, the Camry Hybrid were off 20% for the quarter; and sales of the Fusion Hybrid, dropped 30% to 6,732 for the first quarter this year.