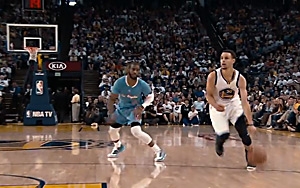 as part of its partnership with the National Basketball Association.

The ads, the first of which broke April 18, coincide with the start of the NBA playoff games. The second spot is in development and will release during the conference finals.

The campaign, which is themed "Offense Is the Best Defense," juxtaposes NBA All-Star Stephen Curry's athletic performance with individuals and community members taking small steps to be more proactive about their health.

The spots will run nationally, encouraging and empowering individuals throughout the country to take control of their health, and ultimately strengthen the communities where they live, learn and play.

The aim of the campaign is to reach community members with the message that making good choices today is the best way to stay healthy in the long run, says Christine Paige, senior vice president, marketing and digital services, Kaiser Permanente.

The overall partnership aligns the NBA FIT campaign, which encourages fans to "Be Active, Eat Healthy, Play Together," with the health care company’s “Thrive” campaign, which is focused on empowering people to maximize their health in mind, body, and spirit.

As part of the multiyear partnership announced in January, Kaiser Permanente and the NBA will jointly host a series of fitness and basketball clinics for children and young adults across the country. Curry, of the Golden State Warriors, serves as a health ambassador for the partnership and the ad campaign.