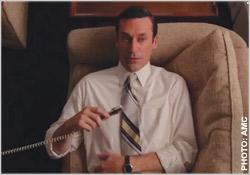 Any episode that offers quality time with Joan, Betty, Sally, and Peggy gets my two opposable thumbs up -- way up. That also goes for a surprise cameo appearance from the ever-hilariously square Lou Avery, and the military monkey still on his back.

Indeed, “The Forecast” actually moves the action forward in satisfying ways, after all the two previous episodes' highly irritating diddling with waitresses in dream states.

It’s the summer of 1970, and the war in Vietnam and Cambodia is escalating. There are repeated references to the army (and a surprise enlistment.) Even Peggy talks like a general, saying “You can’t fire my men!”

The big daddy of war references, of course, is to Lincoln’s Gettysburg Address. With blood on the ground, a civil war was fought in Don’s apartment, too. It’s over now, and there’s renewal: new residents, who are even bringing a new life into the battleground.

Now Don must find a new place for himself.

And oddly, that’s tough for Don, who in his past, has been a master of reinvention. This time, however, he seems lost, like the “lost boys” in Peter Pan. He just can’t seem to summon up that vision thing. 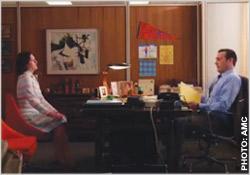 Indeed, we see the need for the “vision thing” throughout, specifically in the charming, almost Shakespearean-type mix-up that lightens up the episode. A very tan stranger, the rich, wild and free retiree, Richard (or perhaps he will turn into a Dick) literally shows up at Joan’s West Coast office door by mistake. He was looking for his optometrist, he says, explaining why he misidentified himself after taking a wrong turn and spotting her: “I’m nearsighted, but not blind” he says, while immediately asking for a date.

So there are problem sight lines throughout “The Forecast.” That includes inappropriate vision (Glen’s shocking return to romance Betty and enlist in the army) and extended vision (Peggy sees her career objectives with crystal clarity: to become a creative director and do something of lasting value.)

But while Don shows some growth in this episode, in his ability to take repeated jabs and criticism in stride, his limited/and or faulty vision is also apparent. He seems unable to focus as he attempts to gather intelligence from others for his Gettysburg Address/state of the agency speech.

Even worse, as Peggy told him, although he can’t picture his own future, he’s shitting on the earnest dreams of others. In one of the best scenes in the episode, after Sally chastens him, and her mother, for the constant search for attention and inappropriate contact with her friends, he tells her that she is like him and her mother. “You’re a beautiful girl,” he says. “But you have to be more than that.” After the dressing down he got from Johnny Mathis, the young copywriter, he’s just talking to himself. Sally is the embodiment of more than a pretty face. 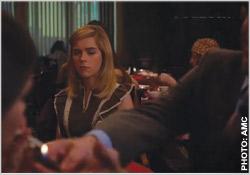 In a piece in the New York Post on Tuesday, a critic said that the “episode was striking in the way it showed how Betty, unlike Don, respects boundaries.”

Yikes. I couldn’t disagree more. They both suffer from profound boundary disorders, just in different forms. Let us count the ways.

The scene where Sally joined her mother at the kitchen table rang absolutely true. Although Betty was trying her best to impart some wisdom about boys, (but really only talking about herself, and her own Teen Tour) it struck me then that Sally (the now grown-up, brilliant Kiernan Shipka) was the sophisticate, who has already seen too much, and Betty was the innocent, trying to stick to the rules. (Her travel group ran around breaking the lights in the hotel hallways, Betty told her. So that in their mischief, they literally could not see.)

The scene not only illustrated the profound “generation gap” of the times, it also spotlighted Sally’s preternatural insight and knowingness. Always a wonderful observer, Sally has been seeing everything clearly since she was a little kid and watched that monk burn himself alive on television, then ran screaming to the adults about the need for attention to her grandfather’s death. Add the fact that she was "sent away" at a young age; it only made her insight into her parents that much clearer.

Perhaps the most fascinating moments happened around the shock of the new Glen. With these scarily sexy Engelbert Humperdinck sideburns, his suave outfit in earth tones (Huckapoo shirt and all), he was obviously all gussied up for his rendezvous with Betty. He came over in the guise of seeing Sally, and taking her to "Playland" with him and his girlfriend. 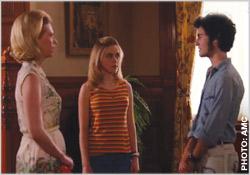 But he just wanted to go back and play house with his longtime fixation, Betty, just as he did when he was 8, watched TV and ate junk food with her, even asked for a lock of her hair -- which he got.

Betty didn’t even recognize him, (identity again!) as he was a very creepy roly-poly 10-11-12-year-old boy, and now he’s a MAN, baby! (An exceedingly slim one, as well!) Many people have commented on how wooden an actor Marten Holden Weiner (Matt’s son) is. That’s true, unfortunately. While he and January Jones recited their lines to each other, it was like watching two Easter Island sculptures interacting. You could cut the sexual tension with a feather.

The scene again points to Betty's lack of self-awareness, in that she toys with the idea that he is doing it for her. She reaches for his hair, and touches his face. That’s not boundary setting. And her response to his question about why they can’t be together -- "I'm married"-- was a girlish way of playing into his ego -- that it was thinkable at all.

It’s interesting that this week’s actions could be read in different ways, and was. For instance, some viewers thought that Joan was actually going to give away her child for the sake of her romance. Au contraire! Don’t you know that after years of being the office manager, our Joanie is the queen of finessing things and finding the elegant solution? Unlike Peggy, or Don for that matter, she operates by stealth, so that people change their behavior without her having to scream or stomp her feet. 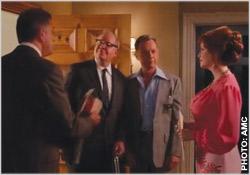 With this move, Joan is not Salome, but Solomon, showing Richard in clear relief how selfish his reaction to her having a son was. (She’s not free to go to the pyramids, dammit, but he’s a geezer!)  It’s interesting how she and Richard -- who is trying to learn how to be flexible, and stay young -- keep trading male/female roles and places. I wonder if he can keep that up.

The episode ends with a brilliant musical choice: Roberta Flack’s “The First Time Ever I Saw Your Face” playing as Don stands outside the double doors of his penthouse on Park Avenue: the defining prize of the Megan chapter of his life.

I  hope we see Sally again, and that the goodbye at the bus station wasn’t the last time. Despite the optimism that Don showed in the face of that amazingly brazen real estate agent, seeing him without a home leaves me sad and worried for him.