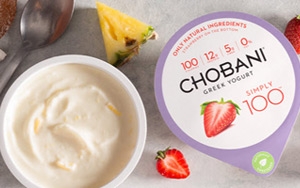 Kraft and Budweiser brand extensions were the top two best-selling food and beverage CPG launches of 2014, but new Greek yogurt variations were once again a dominant category, accounting for four of the top 10, according to IRI's just-released New Product Pacesetters rankings.

The Bud Light Lime brand, a leader in leveraging Millennials' thirst for innovative beverage flavors, had another major success with its new Straw-Ber-Rita beer margarita variety. Straw-Ber-Rita secured the #2 ranking, racking up $128.6 million in first-year sales.

Greek yogurt launches' continued strength is no mystery, given their ability to deliver on a consumer-trends trifecta: healthy, snackable and convenient. Chobani Simply 100, the brand's all-natural low-cal offering, grabbed third place with $120.9 million in sales. Fellow category launches in the top 10 include Dannon's Activia Greek at #5, with $86.5 million; Chobani Flip at #6, with $83.2 million; and Yoplait Greek Blended at #10, with $69.4 million.

SkinnyPop popcorn — another "all natural" (and also gluten-free and "guilt free") snack that comes in several flavors — ranked #8, with $76.4 million in sales.

Topping the rankings, with an impressive $296.6 million in sales, is a new human personal care brand: Cottonelle Ultra Comfort Care, described as the brand's "most luxurious" toilet paper, and marketed as enabling users to "go commando" with confidence.

The new products that generated the most heat in C stores last year continued to be within two of the channel's traditional stronghold categories: beverages and cigarettes.