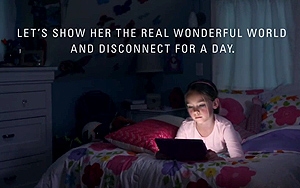 With a poignant plea for parents to drag their hyper-connected families outdoors, Cabela’s is launching a national Disconnect Day, hoping to get people to ditch their phones in exchange for a day in the great outdoors. The sporting-goods retailer is partnering with country star Justin Moore as spokesman, and the ad for the effort features his version of the classic song “What a Wonderful World.”

Plans call for offering a free download of the tune to anyone who takes the #MyDisconnectDay pledge, selecting the date of their digital detox. It includes the promise to “set aside the small screen to once again see the big picture. … And most of all, I pledge to get my head out of my app, with liberty and just us, for all.” (See the Ogilvy created spot here.)

The Sidney, Neb.-based company says the effort grew out of research focused on parents’ growing concerns that kids spend so little time outdoors playing (between just four and seven minutes per day, according to one survey), as well as mobile phone penetration topping 80% among teens.

The pledge also helps people set an “Out of Office” generator, prompting a calendar reminder, as well as gear lists. Afterwards, the chain encourages them to share pictures on social media with the #MyDisconnectDay hashtag.

Separately, the company posted stronger-than-expected results for its fiscal first quarter, with revenue climbing 14% to $827.1 million.

Comparable store sales fell, though, slipping 1.3%, which it attributes primarily to changes in Canadian currency rates.

“We have started the year well and are pleased that the extreme volatility in firearms and ammunition over the past two years seems to have normalized,” CEO Tommy Millner says in its announcement. “We were particularly pleased with the continued improvement in comparable store sales as hunting equipment, optics, camping, fishing, shooting, and powersports all comped positively in the quarter.”

The company says its newer format stores continue to outpace older units, and that it intends to open 11 more in the fiscal year. It also reaffirmed its forecast that it expects a “low-double-digit growth rate” in sales for the full year.