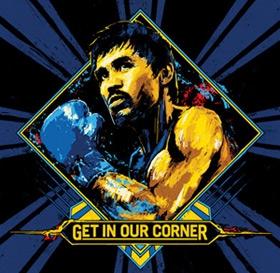 Nestlé's Butterfinger is making the most of its marketing deal with world champion professional boxer Manny Pacquiao, as he prepares to battle Floyd Mayweather, Jr. in the "Battle of the Century" on May 2.

Earlier this month, Butterfinger announced that it's "betting" on Pacquiao, and will give away a million of its Butterfinger Cups if he does win. (Actually, the brand will give away 500,000 coupons -- each good for one two-piece package of the peanut butter cups, only at ButterfingerCups.com, on May 5 between 6 a.m. and 6 p.m., while supplies last.)

Butterfinger has been running an aggressive campaign on its social media channels featuring Pacquiao, using the hashtag #GetInOurCorner. The premise is that he's training to help Butterfinger Cups, which have a crunchy filling and square shape (four corners), go up against the "plain" (read Reese's) cups, with their smooth center and round shape.

Now, the brand is offering a free digital version of an exclusive "commemorative portrait" of Pacquiao, available to the first 25,000 fans who download it at ButterfingerCups.com/GetInOurCorner.

The portrait, commissioned by the brand, was created by Warren Fu, an award-winning director and artist. The brand says that Pacquiao has requested that the original 30" x 30" acrylic painting ultimately be displayed in his home (it's currently on display in Fu’s L.A.-based studio).

The digital portrait is one of a variety of surprises Butterfinger has promised fans during its campaign leading up to the fight.

Butterfinger Cups is reportedly the most successful product launch in the history of Nestlé USA’s Confections & Snacks division. The brand is currently marketing the launch of the candy's "minis" version.